The Escape to Cabo 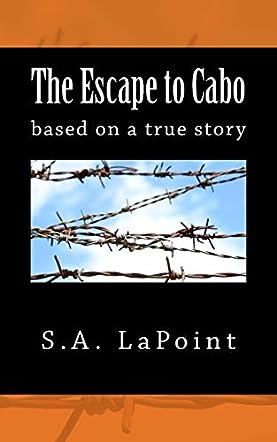 I decided, at the age of forty, to turn left when all with sense would continue forward... the familiar, well trodden path, the undeniable choice.
The un-chartered course filled with danger, obstacles and crossroads made me the man I am today and will be the measure for eternity.
I smile, regret never a companion... SLP

The Escape to Cabo is a nonfiction memoir written by S.A. LaPoint. Scott Frieze had never quite gotten over his childhood obsession with becoming a bank robber. He was in the early stages of a comfortable middle-class, middle-age existence, when he decided, finally, to act upon that fantasy. The first time he robbed a bank, everything went surprisingly smoothly, and, had he decided to make do with that one adventure, all might have continued on as normal for the father of two and manager of an auto showroom. Giving in one more time to the imp of the perverse was to prove his undoing. He had actually stumbled into the middle of a Federal sting and ended up in jail with enough charges against him to ensure that he would be very old before he was a free man again. The prosecutor assigned to his case seemed vindictive and out for blood, and the judge was reputed to be quite strict, but Frieze eschewed the offer of a plea bargain and decided to risk a trial. Jail was a strange and challenging place for him to find himself in, especially considering the fact that, at forty, he was looked upon as an old man and a likely victim. When he finally finished serving his time and was released from prison, he found he was leaving a family of people he had grown to care about.

The Escape to Cabo is a stunning and memorable work that documents the experiences of Scott Frieze while in prison and afterwards. The prison stories are unforgettable, especially when he discusses those first early days when his newness makes him an enhanced target, and he gradually learns how to navigate and survive his new world. The courtroom scenes are dramatic and true-to-life, especially when Scott takes the stand in his own defense. That part of the story which details his life after his release is of particular importance as it highlights the challenges faced by new parolees, who not only have to find lodgings and jobs willing to hire ex-cons, but may be supervised by parole officers determined to see them returned to prison. I was stunned by the treatment Frieze receives at the hands of his parole officer, and saddened by the growing desperation he feels with each passing day.

LaPoint’s story is beautifully told; his writing is smooth, effortless and powerful. There’s a great deal of humor and comic relief; I have particularly in mind one incident with a prison guard that still has me chuckling whenever I think about it. There’s also drama, and, above all else, there’s one man’s triumph over a bureaucracy that sees prisoners as a source of slave labor and recidivism as a profit maker. I do hope to read more of LaPoint’s inspired writing and soon. The Escape to Cabo: Based on a True Story is most highly recommended.

A great read, gripping, couldn't put it down. What an incredible story. Read it from cover to cover while on a flight from Hawaii to Los Angeles. Excellent job Mr. LaPoint, can't wait to start reading your next book "The Scenario". ⭐⭐⭐⭐⭐