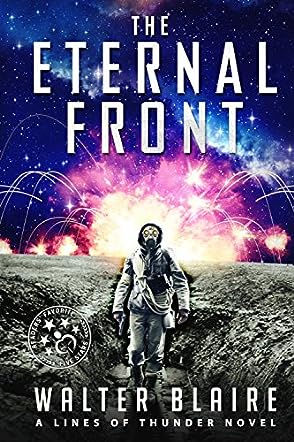 In the past, Walter worked with computers and taught college courses in intelligence analysis. Now he writes as much as possible, and to keep in shape he thinks about exercising.

The Eternal Front by Walter Blaire is the novel for readers who are into conflict-driven plots and great settings. In this book, the conflict is raised with the stakes when the protagonist finds himself torn between destroying his own world to save it, or doing what follows his line of duty and losing everything. The reader is transported to Grigory, a world that is poisoned by war, once a dumping ground for genetically programmed humans, bred for war in the trenches, but the war may not have an end. Captain Sethlan Semelon is an old soldier, a man who has spent his entire life fighting for the Empire. He has just discovered the Lucky Strike, a sentient, independent prospector ship that is manipulating the war and that is about to implement a colonization plan for the planet. The war will escalate if the ship blows the trenches. To save his world, Sethlan must do the impossible.

Succinct and deft, the story rings with powerful emotions, creating a breakout, surprisingly engaging world for fans of sci-fi. I enjoyed the high-scale conflict and the masterful manner in which it is handled. Walter Blaire is a master storyteller with the rare gift of creating engaging and fascinating characters that are plunged into a phenomenal conflict in a breathtaking setting. I was arrested by the lyricism of the prose right from the beginning. The writing is so beautifully done and it will have you seduced and keep you reading until the very last page. The images are stunning, the action is intense and breathtaking, and the plot twists are like nothing I have read in this kind of work before. The Eternal Front is a compelling read.