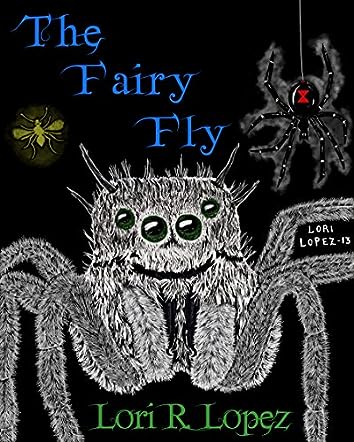 Lori R. Lopez wears many hats, although at times she feels the hat is wearing her. An award-winning author of short stories, novels, novellas, verse, songs and more, she designs her own covers and illustrates nearly all of her books. When the mood strikes, she pens a humorously serious column called “Poetic Reflections” at Fairy Fly Entertainment, a website shared with her two talented sons Noél and Rafael. She grew up in Wisconsin and also lived in Hawaii, Florida, Spain, and Key West before settling in California. Vegetarian or vegan most of her life, Lori’s work is often quirky yet at times addresses more serious themes such as the rights of animals and children. Stories and verse have appeared in assorted publications including Weirdbook, The Horror Zine, Bewildering Stories, The Sirens Call, and numerous anthologies.

In The Fairy Fly, author Lori R. Lopez takes a look at some of the world’s smallest creatures. Lopez’s novel tells the story of Spider, a recently hatched jumper spider who is trying to find his way home. Spider was the smallest of his egg sac and the last to come out because of his fear of leaving the nest. Little did he know that his adventures were going to get even bigger and scarier. For Spider, finding a home that was safe and warm was important, and he thought he had found the perfect place. His home was dark and secure, closed off from the scary world, and soft, and it was also the pocket of a sweater that was soon going to take him far from home. When the owner of the sweater, the young boy whose home Spider lives in, takes his sweater to school, Spider finds himself in a strange, exciting, and dangerous new world. In his adventures, he encounters wonderful new friends, dangerous new foes, and the magical and mysterious Fairy Fly, and learns that the world is a grand place that demands to be explored.

Lori Lopez’s book, The Fairy Fly, is a wonderfully fanciful tale. Fans of books such as Charlotte’s Web and Stuart Little are sure to be intrigued by this tale, which celebrates the little things in life and how one being, no matter how small, can make a difference. It was Lopez’s unique dialogue that captured my imagination, however. Each creature had a unique voice, and the playfulness of characters, such as the Merry Mites, or the wise speeches of the Bookworm reminded me of the aura created in the works of Lewis Carroll. The book took just a little bit for me to get into, but by the end I was completely immersed in Spider’s world. My only concern was that at times it was difficult to get a clear view of setting, because of the smaller viewpoint of Spider. More tangible descriptions of setting would have made it easier to deduce where Spider was located, but it is my understanding that Lopez plans on making an illustrated version of this tale, which should help with this confusion. I highly recommend this tale for Young Adults and any who needs a reminder of just how wondrous our world really is. I hope to read more from Lori Lopez in the future.