This Flag Does Not Come Down 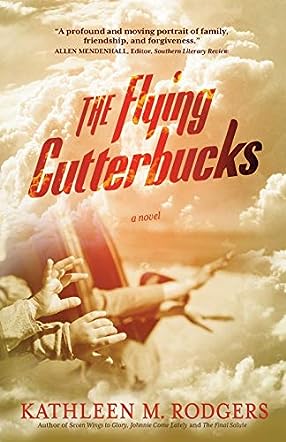 "I am always the daughter trying to write my way home."

I'm a novelist and former freelance journalist whose work has appeared in Family Circle Magazine, Military Times, and in several anthologies.

One of my longtime dreams was to set a contemporary novel in New Mexico, the land of my birth. I wanted to write a novel that would empower women, and to speak out against male predators at the highest levels of our government. It was also important to give a voice to military families whose loved ones are still missing overseas and to tell stories of women who will never see fifty again.

The Flying Cutterbucks by Kathleen M. Rodgers is a women-centric drama novel that follows three women whose fates irrevocably changed after a traumatic event in their lives. It's 2016. Trudy watches with horror as the man admitting to groping women without their consent on record becomes the President of the United States. The shocking result of the election transports her decades back to that fateful day in 1974 when she was a witness to her thirteen-year-old sister, Georgia, being assaulted by a heinous relative. Trudy, Georgia, and their Aunt Star kept the aftermath of that event a secret for all these decades. However, with the current political climate, the memories came flooding back. Meanwhile, Trudy reunites with her old high school sweetheart, Clay Cordova.

An absorbing story about sisterhood and trauma, The Flying Cutterbucks is full of heart, humor, romance, and much more. Author Kathleen M. Rodgers doesn't shy away from delving into some sensitive topics that have become increasingly relevant in our era. Issues such as child abuse, trauma, and incompetent and corrupt people in positions of power are seamlessly woven into the narrative, adding a sense of depth to the story that makes it all the more captivating to read. The plot is non-linear as the narrative switches timelines between 1974 and 2016. I found the characters genuine and authentic. Their distinct traits and idiosyncracies charm their way into your heart and make you root for them. If you love women-centric character dramas, The Flying Cutterbucks is the book for you.