In Search Of A Way Out 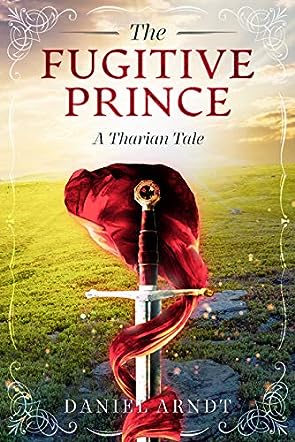 Daniel Arndt was born on the small islands of Haida Gwaii, British Columbia. He spent many years learning and exploring the world to expand his horizons and opportunities beyond his humbling home. He's explored the world of creativity through art, writing, crafts, and voice and hopes to share it with the world.

A young prince must battle his way back home to defend his kingdom in the thrilling fantasy adventure, The Fugitive Prince (A Tharian Tale) by Daniel Arndt. Sent away as part of a peace treaty a decade ago, Valente, Prince of Tharia, struggles to live among the nobles of Lios. Striking opposites of the Tharians, the Liosians are cold, ruthless, and delight in lying. When the King of Lios dies suddenly, Prince Valente's fate, along with that of his people, is sealed with the crowning of the new king. Quickly made privy to the Liosians' nefarious plans to dishonor the treaty by killing Valente and starting another war by season's end, he becomes a fugitive, desperate to find his way back home. With his only friends in the kingdom now dead, Valente must fight for his life and escape across the border. Only, he has spent his life confined within the castle walls of Lios, and has no fighting or survival skills. Once outside the castle's walls, Valente discovers that he is ill-equipped to deal with common struggles such as foraging for food and finding shelter. When a young woman, Cass, intervenes, and offers to assist him, he is in no position to refuse. Can Cass help him to cross the border and warn his people of a surprise attack? Or will Valente's poor training endanger them?

The Fugitive Prince (A Tharian Tale) by Daniel Arndt is an exquisitely written fantasy novel with a rich storyline and charming characters. I was instantly drawn into the story, immediately pulled into the hero's noble quest. At first, it was hard to empathize with Valente's weaknesses, as realistic as they were. Then, as he starts to mature and move outside his tragic childhood, you see a glimmer of hope that quickly turns into a flame. Valente may have been spoiled to the point of neglect, but as the story progresses, we see him slowly grow into a man. The pacing was spot on and the emotional growth of the characters is heartwarming. The story world is engaging, with many breathtaking aspects that cause the reader not to want to put the book down until the very last page; I am anxiously awaiting the sequel! I recommend this book to readers that enjoyed The Princess Bride.

Daniel Arndt pens a tale of devotion and adventure in The Fugitive Prince. The kingdoms of Lios, known for its iron, and Tharia for its abundance of hardwoods, are at odds with one another. A trade agreement is forged between the two realms, making young Prince Valente of Tharia the bargaining chip of the treaty. Prince Valente, “the foster,” grows up in Lios under the tutelage of Arthan, his beloved Tharian mentor. After hearing the news of the King Leoin’s death, Valente heads to the Liosin castle. Valente despises Lios, and traveling through the capital city the foster prince is mocked by whispering merchants, townsfolk, and the royal guard. Inside the royal court, Arthan greets Valente, reminding him of his role regarding the peace between Tharia and Lios. However, after the coronation of the new king, the Liosians plan to ignore the treaty. Valente goes to the only person he can trust, Arthan. He finds Arthan dying in the library. Moments after Arthan’s death, the foster prince becomes a fugitive. Prince Valente must return to Tharia and warn his father of the impending war. Hiding in the forest from the royal guard, weary and hungry from running, Valente meets the huntress, Cassandra. Together, they embark on a perilous and life-changing journey to get Valente home.

Daniel Arndt is a talented storyteller. The Fugitive Prince is fuelled by an adventurous and imaginative plot. The story is penned with wonderful and rich, detailed descriptions; it is fascinating, treacherous, whimsical, and comical at times. The narrative has a great pace; there is never a lull in the action or a dull moment. The cast of characters is written with both power and vulnerability. With each turn of the page, the young protagonist is challenged to grow beyond who he is and into the person he must become, creating dynamic character growth. “Some things are worth changing. Other things are worth changing for.” The conflict of man versus fate keeps the story spinning, yet there are internal and external conflicts that must be faced and overcome as well. The hero is buffeted and strengthened by two oddly untamed, yet fiercely patriotic strangers. By the end, the unusual duo proves to be his most loyal and faithful friends. I enjoyed Daniel Arndt’s The Fugitive Prince from beginning to end. I hope there will be more tales of Tharia and the prince.

The Fugitive Prince: A Tharian Tale by Daniel Arndt is a fascinating story that is intelligently plotted and skillfully written. Valente is a young prince growing up in a foreign court in a far-off land. He is treated in the most degrading ways, being called “foster” and “wannabe prince” by the captain of the royal guards, just a few of the ignominies that test his will and bring down his dignity and nobility. He knows that fairness is rare in Lios and even more so at the Royal Court. The coronation of a new king brings new challenges and he suddenly finds himself in grave danger. He has to flee to stay alive, but the destiny of a powerful kingdom rests on his shoulders and he might be the only key to the peace that many have hoped for between Lios and Tharia. Can he accept his destiny and rise above the scorn of Lios to inaugurate a new era?

This is an enthralling story with wonderful characters and I was pulled in from the very start with the crisp and gorgeous writing. Daniel Arndt writes about the setting with colorful imagery, allowing readers to easily imagine the world in which the story takes place and the rules that govern the lives of the people. There is beauty in the descriptions that make the reader feel as though they were experiencing the world and emotions of the characters, images that readers can easily picture in their minds. The use of metaphors gives beauty to the writing. Apart from the delectable prose, the pacing is just right and the short chapters with shifts in scenes make for a great reading experience. Relationships are well-explored and I particularly enjoyed the role the Old Tharian plays in the young prince’s life and the lessons he learns from him. The Fugitive Prince: A Tharian Tale is a gem for fans of elegantly written novels with settings that hint at the medieval era and characters that are elaborate and believable.

The Fugitive Prince: A Tharian Tale is written by Daniel Arndt. The Water Wars ended eleven years ago and a treaty for peace was forged between Tharia and Lios. Tharia had suffered devastating losses and needed peace. Taking advantage of this, the kingdom of Lios, crafty and proud, forced peace at a price. They would foster Prince Valente the First, son of King Hamen and the only heir to the Tharian throne. Valente grew up in a court filled with enemies, people who looked down on him and mocked him for being a captive prince. However, Valente's role as the token of peace would soon prove null when he uncovered a sinister plot. Far from home and not knowing who to trust, he was forced to undertake a journey that would help him discover many things he never would have learned while trapped within the castle walls.

Daniel Arndt has done an exemplary job of expressing the prince's constant frustration and anger about his situation. The author's ability to narrate the prince's journey goes beyond merely describing his travels. I was so fully immersed in the prince's adventures that I came to appreciate every rare ally he encountered and every life lesson he learned along the way. I particularly appreciated Cassandra of Riverpeek who wasn't afraid to fight for what she believed was right. I laughed when she asked for free gold, a house, and handsome manservants after learning who Valente was. She definitely knew what she wanted and needed in life. The slow-burn romance between her and the prince was skillfully done. Their chemistry was not rushed and they grew closer and stronger with every problem they encountered together. There were so many great things about this book that I found it hard to put it down when I finished. I am itching to find out what will happen next. The Fugitive Prince was impressive, unforgettable, and I will probably toss and turn at night wondering about the next book. Kudos to the author for a job well done!