Murder Under A Full Moon Thousands of Cupid’s Arrows on the Battlefield of Love (the Gold Lotus Trilogy)
by A.D. Dauphinais
Fiction - Fantasy - Epic
430 Pages
Reviewed on 04/28/2021 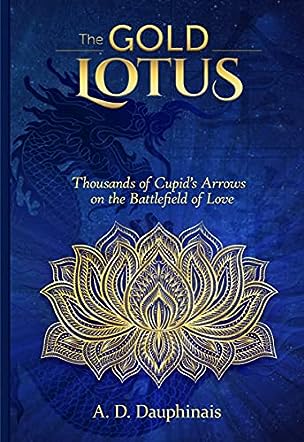 The uprising of Yaksha, a monstrous demon, threatens the peace of the Imperial Heavenly Realm. The Emperor, guided by the wise sage, performs a sacred ritual to thwart his attack. The mighty God of War, after a vicious battle against Yaksha, ends up severely wounded. The Goddess of Compassion, serving her mortal trial in an unknown location, nurses him. Together, they raise a son named Kanu, the manifestation of the supreme Creator himself. Kanu’s eternal companion, Lada, also manifests as a golden lotus. After taking his place in the Imperial Realm, Kanu, along with his friends, strives to protect the world by destroying the evil forces lurking everywhere. The Gold Lotus by A.D. Dauphinais is the mythical story of Kanu’s various endeavors.

The Gold Lotus: Thousands of Cupid’s Arrows on the Battlefield of Love is a unique amalgamation of Hindu and Chinese mythology. A.D. Dauphinais took characters and elements from both cultures and merged them into a seamless storyline. Her inclusion of the key features and attributes of all the legendary characters gives them a unique persona. The narrative explores the everlasting battle between good and evil and highlights the former’s triumph over the latter. A tale full of politics, revenge, cunning ploys, and betrayals, this mythical story excels as a thrilling venture into the workings of heaven. Yet, the central theme of the book is pure, unadulterated love. Be it romantic, or filial, or brotherly, love surpasses the power of evil and brings together different realms into a united front. I would definitely recommend The Gold Lotus to any reader who appreciates mythology.