by Albert A Marsolais Why Isn't God a Girl? 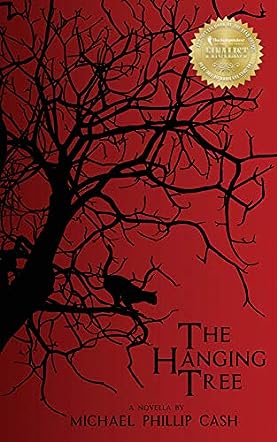 The Hanging Tree by Michael Phillip Cash is a haunting novella about a curse that has lasted generations upon generations, and how, against all odds, one girl managed to break it. Goody Bennett was a old wise woman who helped Salem village with her skills as a healer and a midwife. Claire, on the other hand, was a woman who dreamed of luxury and pleasure. Things take a turn for the worse when Claire engages in an intimate affair with the Reverend Harmond, who then later ostracizes the two women. When Claire is found dead, Goody Bennett curses Revered Harmond and his descendants, just before she is killed. Years later, Arielle and her boyfriend, Cash, arrive at a lone spot in the middle of the night, hoping to spend some time with each other. Mysterious entities watch over them as they wait for another tragedy to befall an eerie place known as The Hanging Tree.

While Arielle and Cash weren’t particularly compelling characters, I did find the ghosts resting near the hanging tree interesting. They were humorous, and not at all what I was expecting for a couple of restless spirits tied to that one tree. I especially liked reading about Martin and Arthur, two unfortunate lovers who were caught up in the curse. To be honest, while I did understand Goody Bennett’s reasoning for taking her vengeance on Reverend Harmond, I was annoyed when she took her anger out on his children. If anything, I’d rather her ghost haunted the Reverend instead, sadistically torturing him until he could no longer tell reality from imagination. Claire was also a tragedy; it took her dying to force her to mature. Personally, it was like reading a couple of fractured fairy tales come to life, but without the happy ending.

The concept of the book was unique. Generations of spirits and tragedies were centered around that single tree, one that had claimed the lives of innocents. Decade after decade of death, until finally someone managed to break the curse. It’s a romantic idea, and one that was woven nicely into the plot. Though I did find the action of breaking the curse a bit anti-climactic, I felt it wrapped up the story nicely.