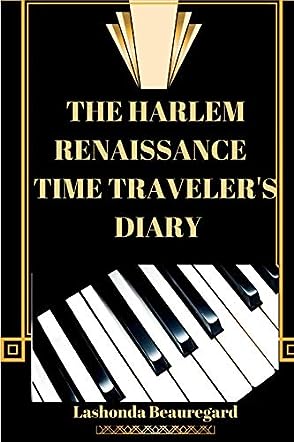 I’m from Alexandria, La, but I’ve lived in Lafayette, La. I’m a graduate of the University of Louisiana at Lafayette. I used to be really shy. I was actually voted most bashful, shyest girl, back in high school. I’m the author of the books The Harlem Renaissance Time Traveler’s Diary, The Mirror In My Dorm Room (A Time Travel Story), The Mirror and The Stone of Zozan, The Tannell's Family Secret, Brotherhood of Secrets & Lies, and Lashonda's Book of Poems and Songs. I also enjoy writing poetry and music as well as stories.

The Harlem Renaissance Time Traveler’s Diary by Lashonda Beauregard is a thrilling little short story written to leave the reader guessing about many things, including the mode of time travel. The main protagonist, West Barrington, is one of the many Black musicians playing during the time of the legendary period of the ‘Harlem Renaissance’ on 30th December 1926, at a nightclub in Harlem, along with other upcoming musicians and singers like ‘Duke’ Ellington and his friend, Bobby J. Blues. As the evening draws to an end, a tired Barrington exits for a walk to refresh himself, and witnesses a murder. He rushes back to the nightclub and after the show closes he drops his girlfriend, Llana Gold, at her house and goes home to a restless sleep - his mind filled with the scene of the murder he witnessed. West wakes up to find he is in a changed world with millions of people, motor cars, and cell phones. Completely bewildered, he has no idea how he has woken up in 2016. The rest of the story is enchanting.

Lashonda Beauregard writes with a flair for meanings in unexpected events, aptly conveyed in the line ‘Maybe Johnny’s right, that could be why I am here to make things right, to do the right thing.’ The cover of the book is attractive and conveys the concept of travel into the future. Dialogue is fast paced and, since it is written in the first person, it forms a continuing narrative from the principal protagonist, West Barrington. There is a touch of romance, a touch of impending criminal events, and of course there are short but well thought out descriptions of the times of the Harlem Renaissance, as well as the world of the future. This short story demands a fast read and it certainly qualifies for a glowing four stars!

The writer LaShonda Beaugard had created here own genre of science fiction plus historical jazz age truths mixed with the intrigue of time travel. Just when you think you read all of the time travel you can stand here comes her jazz infused storytelling of multifaceted characters breathing life back into the genre.Real sci people will appreciate this book.