A Murder is Forever 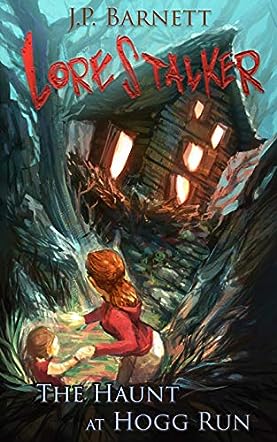 J.P. Barnett grew up in a tiny Texas town where the list of possible vocations failed to include published author. In second grade, he worked harder than any other student to deliver a story about a tiger cub who singlehandedly saved the U.S. Military, earning him a shiny gold star and a lifelong appreciation of telling a good story.

J.P. currently resides in San Antonio with his wife and hellion of a cat, both of whom look at him dubiously with some frequency.

The Haunt at Hogg Run is a horror novel written by J.P. Barnett. The whole idea of a family adventure at Kat’s family’s cabin was uncomfortable, to begin with. Kat Barker had been the golden-haired Head Cheerleader at Rose Valley High when Macy was a freshman -- and a nerd at that. While Macy was away at college, her dad had married Kat and adopted her daughter, Olivia, leaving Macy feeling awkward and constrained at the concept of a new family complete with a step-mother four years her senior and a seven-year-old step-sister. Still, for her dad’s sake, she had accepted the invitation -- how bad could it be? After her cryptid-hunting experiences with her boyfriend, Tanner Brooks, and his sister, Miriam, who was also her best friend, she figured she should be able to cope with an awkward family get-together. But there was the old man and the decaying cabin that almost seemed haunted, the heavy noises that followed her footsteps on the trail, and that scream.

While J.P. Barnett’s The Haunt at Hogg Run is the fourth book in his Lorestalker series, it can be read and enjoyed as a standalone novel. That said, each of the books in this series is outstanding, especially for those readers who enjoy cryptid stories. I was initially surprised to see that The Haunt at Hogg Run was focused solely upon Macy Donner rather than the cryptid-fighting trio she’s normally a part of, but soon found her solo adventure to be absorbing, fast-paced and filled with the cryptid clues that make Barnett’s work so irresistible. The plot is haunted-house spooky, and the chronicle of the events at Hogg Run that happened ten years prior keeps the reader engaged and involved in figuring out the puzzles and challenges as Macy encounters them. Macy’s character assumes fully-fledged cryptid-hunter status with this book; watching as she confronts her own insecurities, fears, and a host of monstrous critters works on so many levels. Barnett’s plot is twisty, unpredictable, and serpentine, and his characters are believable. His setting drips with ominous overtones and makes this haunted cabin story roll. The Haunt at Hogg Run is most highly recommended.

The Haunt at Hogg Run is a work of fiction in the horror, suspense, and dark adventure sub-genres, and was penned by author J.P. Barnett. Described as ‘A Creature Feature Horror Suspense’ and the fourth volume of the Lorestalker series, this is a work that can be read as a standalone novel, as the adventure focuses solely on one experience of the young protagonist Macy Donner. Camping in the woods with her new stepfamily is not the ideal way to spend vacation time, but things take an even more sinister turn for Macy with terrifying weather shifts, screams in the dark, and the looming silhouette of a haunted house with secrets to be unleashed.

Author J.P. Barnett has crafted an excellent work of suspenseful horror fiction which really balances its story and builds up with all-out shocking scenes that leap out of the plot and scream at you. I was really impressed by the quality of the atmosphere, which develops around the central character and creeps into her actions and sensations so that we too have shivers running up our spines as we explore this macabre and chilling world with her. I absolutely loved the dialogue and East Texas vibe, which helped to set up the characters really well and populate the world around them with other realistic figures. This makes for an engrossing world to jump into, and overall I would definitely recommend The Haunt at Hogg Run for horror fans looking for a fully immersive and spine-tingling experience.

The Haunt at Hogg Run by J.P. Barnett, the fourth book of The Lorestalker series, recounts Macy Donner’s terrifying experiences during a family vacation. Although part of a series, this book can easily be read as a stand-alone. The storyline alternates between two narratives spaced ten years apart. One features Albert Weiss, a despondent war veteran resuming the family business of running a horror show. To make the show more frightening, he creates newer monstrosities that eventually run out of control, culminating in a horrific accident. Ten years later, Macy, along with her stepmother and stepsister, arrives at the uninhabited family home. With monstrous creatures attacking them in the dark, and a lunatic neighbor bent on killing them to protect his long-kept secrets, can Macy save herself and her companions from the terror lurking at Hogg Run?

J.P. Barnett’s tale reminded me of my favorite Goosebumps stories, albeit with an adult twist. With a central backdrop of horror, Barnett laces together several accompanying themes to give the story sufficient depth. Albert’s character exemplifies the post-traumatic stress disorder often associated with war veterans. Albert’s reclusive father shows a bone-chilling, natural penchant for cruelty. On the contrary, despite having misgivings about her lack of courage or strength, Macy shows a remarkable presence of mind. I loved her compassionate nature, her protectiveness of her stepsister, and her resolve to maintain an unwavering moral compass even in the direst of situations. Themes of love and family bonding, although rare in horror stories, predominate the storyline. With both fantastical and real-life monsters, suspenseful chase sequences, and a brave protagonist, The Haunt at Hogg Run is a real treat for fans of the horror genre.

J.P. Barnett's "Lorestalker" series in general, and certainly "The Haunt at Hogg Run" in particular, call to mind such horror masters as Dean Koontz and John Saul. At the heart of his scary stories are his characters and their relationships. This talent of Barnett's raises his tales of horror to the level of literature, and make for a most entertaining read.