Be Bigger Than You Think You Are! The Heart of Hannen 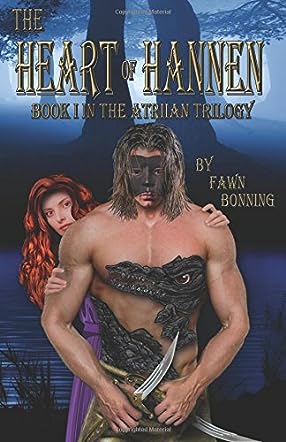 The Heart of Hannen is Book One of the Atriian Trilogy, an epic fantasy written by Fawn Bonning. Christine Clavin has a history that haunts her sleeping and waking life and has her whole high school treating her like a freak. When she was a sophomore, a janitor assaulted her at knife point. Christine was found to have justifiably killed him in self-defence, but the fact that she stabbed Sanchez 53 times has Christine as worried as anyone else. Her younger sister, Kim, is being taken to the emergency room by her mother as the story opens, after Christine tried to strangle her. Christine has always had problems with controlling rage, but this time her mother talks of having her committed; a scary thought. Fortunately, her big brother Sam had intervened before she could do any real damage to Kim. Sam was always there for Christine, sometimes annoyingly so, such as when she meets Kyle, a neighbor’s nephew, and accepts a ride from him. Christine’s world is abruptly turned upside when she visits her favorite swimming pond and finds that a vast system of caverns can be accessed from it.

Fawn Bonning’s coming of age fantasy story, The Heart of Hannen: Book One of the Atriian Trilogy, is a marvelous and intricate tale that is deep and rich with imagery. Christine finds herself in an unsettling alternate world where women are consigned to washing, cooking, breeding and whoring, and seem of less value than domesticated animals. Her temper and sharp tongue get her into some fairly serious situations as she navigates her way through this world. I quickly found myself engrossed in this remarkable story. Bonning’s characters are living, breathing people, heroes and villains alike, and her story is original and highly creative. The only problem I had with The Heart of Hannen was with the language used by the inhabitants of Atriia. The many Atriaan words used in the text require the reader to frequently stop and refer to the glossary at the back of the book. I found this sometimes broke my involvement in the story, especially when reading an action scene, and would have preferred to be able to access a translation in a footnote while I was reading. That aside, The Heart of Hannen, Book One of the Atriian Trilogy is grand epic fantasy that has me eagerly anticipating diving into the second volume of the trilogy.