Kings of a Lonely Kingdom 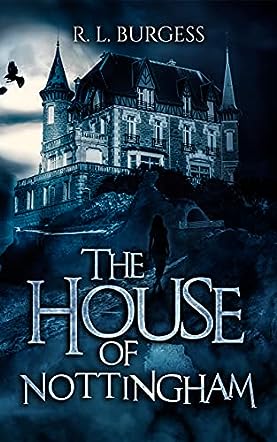 R. L. Burgess is an author of fiction in the dystopian, romance, science fiction, and fantasy genres. Her novel, Justice without Mercy is the first book in the dystopian romance series, Factions of Virtue. She graduated from Juniata College with a degree in Creative Writing and Psychology. She lives in Virginia and when she is not writing, she works as a professional counselor in private practice.

The House of Nottingham, by R. L. Burgess, is a moody, psychological novella of mystery, suspense, and redemption. We begin with the strange House of Nottingham, which has a history within its walls. It's a Tudor mansion, with rooms to explore, but the house teaches the main character Shayla lessons about herself which are just as mysterious. She has memories and fears that need answers, and this house draws her like a magnet in the way that The Overlook draws Jack in Stephen King's The Shining. But this is where the similarities end. Burgess has created a concise work of storytelling that will pull you in and have you unraveling the mystery of Shayla right alongside her. Burgess creates an atmospheric story of mental health and dark imagery, and there are some violent and sexual scenes so that trigger warnings may apply.

I like how the author infuses her writing with her background in psychology, as it adds a layer of realism and depth. Her use of vivid descriptions plays on your imagination, and right away, you are involved in the stage she sets. We find ourselves in the middle of a flashback with Shayla and Logan and beautiful horses with lovely names. This flashback informs the audience of the later developments that unfold in the mansion, beginning with the forest that seems to come alive around her, glowing red eyes included. Shayla tells herself these things aren't real... but are they? I like how the author places the plot out of sequence so that you are as mystified as Shayla as to what is going on and how she is feeling. This nonlinear style works well for this story and also heightens the mystery and suspense.

Each room draws Shayla in, and each one holds a secret. You'll find mental challenges, spirituality, symbolism, and some romance. In this way, the novella may remind you of an immersive hidden object game, where you explore each room, never knowing what to expect or where it will lead to next. The plot is tight, the dialogue natural, the conflict real, and the pacing perfect. I like the unexpected twists the author creates, and of course, the satisfying ending. Treat yourself to The House of Nottingham by R. L. Burgess for an intense work of dark entertainment and psychological mystery.

The House of Nottingham is a work of fiction by R. L. Burgess. Shayla ran through the woods in cold rain toward the old mansion. She thought she heard a beast chasing her. Once inside, she heard a crash from the basement and went to investigate but found nothing but many old photographs and Logan’s notes on mythology, religion, and archaeology. In the upstairs library, she met Jacob, the groundskeeper. He told her many weird stories about strange goings-on at Dr. Logan Vaughn’s mansion. She heard music coming from upstairs and went to investigate. When she entered, there was only silence. In the kitchen, the door burst open, and a huge shaggy figure stood there. She ran up to the second floor and locked herself in one of the rooms. Sometime later, she told Jacob about the ferocious creature, but he had not seen anything, reminding her that strange things happened around the mansion. Strange things continued to happen as the stormy night wore on. Then she discovers Logan’s terrible identity...

In The House of Nottingham, R. L. Burgess weaves an intricate little novella that clutches at the reader from the first page. A stormy night, a frightening creature chasing her, mysterious rooms, and Shayla’s lover is the greatest mystery of all. Tantalizing flashback threads provide historical connections for the story’s tapestry that gradually build tension as Shayla slowly discovers a past she does not want to remember and Logan’s tragic, horrible reality. A love shattered and a future torn from her grasp. The House of Nottingham is a rich story, and readers will be rewarded with a satisfying ending.

A descent into madness. An unexpecting heiress. The House of Nottingham by R. L. Burgess builds around the idea of an eerie mansion, as popularized in scary tales, filled with mystery, shady characters, towering staircases, portraits of dead people, and other such devices that conjure up horrifying scenarios. Shayla Aubrey, a graduate student and a history buff, pays a visit to Dr. Logan Vaughn, the owner of a historic Tudor mansion that Shayla finds herself drawn to. It is an opportunity for her to explore and debunk the myths surrounding the House of Nottingham. Dr. Vaughn is a true gentleman, but there is something wrong with him: dark compulsions and uncontrollable violence. He struggles to find its root cause and runs extreme tests in the hopes of fixing himself. Shayla needs to get out of there.

Yes, there is something about the house. It is dark and atmospheric, and the tension hinges on its brooding nature. R.L. Burgess makes it a waiting game for the protagonist. Shayla is unsuspecting (at least initially) and responds to the bizarre rumors about the mansion with a thirst for curiosity and investigation. Then Burgess’s narrative hits you as an atmosphere of dread is unfurled in the process. The House of Nottingham is a novella in which you can’t help but admire how Burgess can sustain the tension through the little things taking place and how effectively plot devices are placed in the right scenes to amplify the horror. Jacob Stewart is another fascinating character study. It has been a tradition for servants of ancestral homes to serve their masters for generations. As the estate’s groundskeeper, he becomes subject to your scrutiny at the beginning of the tale and develops as the story progresses. For anyone who enjoys reading suspenseful tales with no let-up in building tension, The House of Nottingham is for you.