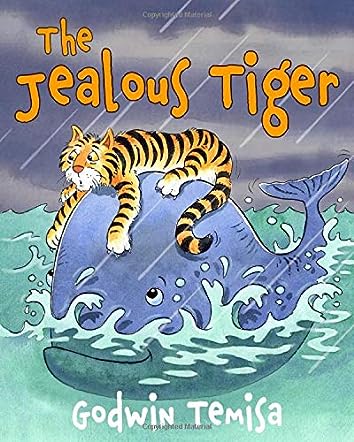 Godwin Temisa loves to write stories.
It was on one of his train journeys to work in
he jotted down his first moral tale inspired by the words of his then little niece. He loves to inspire others, and he who strongly believes that there is no perfect life.
He instead leans on the tenet that corrections and going back to the basics of natural principles can spice up our understanding of the world and how we relate to each other.

Bika, the tiger, wants to be king. He is very jealous of King Oben, the lion. The animals of Zuba Forest had voted for Oben as their king, to look out for them and protect them. King Oben was a very good king. But when the forest animals plan a big party for King Oben, Bika becomes angry. In his anger, he decides to leave Zuba Forest, to find a place where he can be king. Only, the island he chooses is difficult to access, and, once there, he can’t find any food and the few animals on the island are frightened of the angry tiger. It’s no good proclaiming to be king of an island where no one wants you. With some help, Bika returns to his home in Zuba Forest. He has learned his lesson.

Sometimes we wish for too much and we believe that others have something better than we do, something we want really badly. Jealousy is a very difficult emotion to control. Author Godwin Temisa has presented this very difficult emotion in a wonderful picture book story, The Jealous Tiger. People of all ages need to learn over and over again the importance of accepting other people as they are and to honor their gifts, not be jealous of them. The beautiful illustrations complement this charming book as the plot of Bika’s adventure to find a place to be king thickens and he learns some valuable lessons along the way. When he returns, he learns not only that jealousy will fester and make him angry and lonely, but the gift of forgiveness, which his animal friends at Zuba Forest freely give, is something to truly cherish, along with his friends. A wonderful story.