The Lady's a Rebel 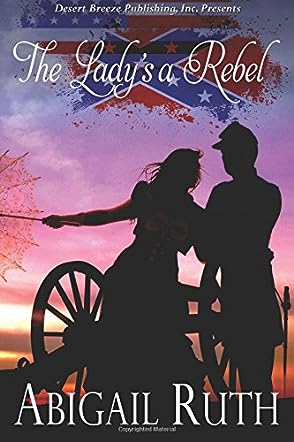 Abigail Ruth, aka Shirley Kiger Connolly is the daughter of 1940s mystery writer, CH KIGER. Under the Aibgail Ruth pen name, she writes historical romances primarily from the 19th Century, her favorite time of history -- especial the Civil War era. After majoring in English and Journalism, she joined the graduates of ICL. She and her husband reside in Texarkana, Texas. Readers can visit her at her website: www.abigailruth2017.wixsite.com/abigail-ruth-romance or at both of her Author Pages on Facebook and also on Twitter.

The genteel south may have gone down in flames, but Abigail Ruth shows readers that the indomitable spirit of the south cannot be squashed in her compelling historical romance, The Lady’s a Rebel. The year is 1864 and much of Vicksburg, Mississippi has been pillaged, plundered and burned to the ground. Southern belle Anneliese Tremaine has been hiding with her two trusted servants, Jeremiah and Lora Belle, in an underground shelter at the end of her Willow Glenn plantation. She’s anxiously awaiting the arrival of her mama, papa and five-year-old brother, Christopher, still at the house. When her parents don’t show up, Anneliese and her servants go up to the house, only to discover it engulfed in flames. With her husband already dead, Anneliese’s mother manages to escape the burning building, carrying her dead child in her arms, but soon succumbs to her injuries and dies.

A broken-hearted and practically destitute Anneliese decides to go to New Orleans to seek out her older sister, Flora, shunned a long time ago by her father for her loose morals. Her parents had told Anneliese that if anything happened to either one of them, she was to take the servants and head to the riverboat, Margarite, whose captain would keep her safe. The only problem with this plan is that Anneliese is going to have to cross paths with the dreaded Yankee blue-coats and, worst of all, she refuses to sign the Union pledge that will give her some measure of safety. Her problems aren’t helped by the attentiveness of a very handsome Yankee army captain who keeps crossing her path when she least expects it…

Somewhat reminiscent of the ultimate southern belle, Scarlett O’Hara, Ruth’s heroine is the ultimate steel magnolia in The Lady’s a Rebel – beautiful and delicate on the outside, but possessing a steel backbone. Anneliese Tremaine may be down but she’s certainly not out and this adds to the character’s compelling charm. At a time when refined young women had scores of servants to do their bidding and deal with all forms of menial labor, Anneliese is hardly prepared, mentally or physically, to take charge of her life and that of her servants and yet she manages to do so admirably. Ruth’s hero is all man, with perfect manners, handsome features and shiny brass buttons. Too bad he’s wearing the wrong uniform. However, the sexual tension, wrong colored uniform notwithstanding, is palpable from the moment the two protagonists meet at Vicksburg harbor and, despite Anneliese’s initial rudeness, one can’t help but root for the two characters. Lora Belle, Anneliese’s maidservant, adds just the right amount of humor and temerity and is the perfect foil for her beautiful young mistress. Well researched with the right balance of narrative and dialogue, The Lady’s a Rebel offers its readers both history and romance in a highly satisfying read from beginning to end.