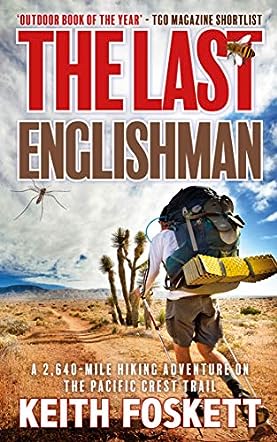 In The Last Englishman: A Thru-Hiking Adventure on the Pacific Crest Trail, Keith Foskett chronicles his experiences hiking the Pacific Crest Trail, a 2,656 mile route that connects the borders of Mexico and Canada. Passing through the states of California, Oregon and Washington, the trail covers sixty mountain passes and includes some of the most breathtaking vistas of the western part of the USA. Foskett's experience begins with an unforeseen delay, but with a little hustle, he manages to make it to the southern starting point on time. Roughly six months later, the adventure culminates in a nail-biting race against the onset of winter in Washington and Oregon. A final chapter deals with the psychological adjustments of returning to the everyday modern world.

When travelling through the pages of this book, you will become acquainted with the quirks of fellow hikers such as Trooper, Flyboxer, Pockets, Hojo, Elk and Sugar Moma, as well as several bears, rattlesnakes, and even a ghost. There are heartwarming encounters with trail angels (both official and unofficial) and blissful verbal snapshots of stunning natural beauty, for example, his account of the challenging, but rewarding John Muir trail. Fozzie, to use the author's trail name, shares tips on trail etiquette and blister care, as well as several eclectic, yet highly creative food concoctions. The true value of The Last Englishman by Keith Foskett, however, lies in the realistic picture it paints of the experience of long distance hiking and the toll it demands from the human body. At times, the narrative is so vivid that you can all but feel the heat of the sun and smell the sweat on his brow.