The Flowers of Penruddock Momma May I Be Me 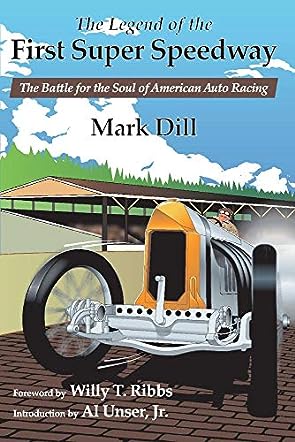 The Legend of the First Super Speedway: The Battle for the Soul of American Auto Racing by Mark Dill is a hard-hitting, heart-pounding story of grit, determination, and the American dream. This robust, visceral book, based on a true story, centers on two main characters, Barney Oldfield and Carl Fisher. Barney is a hard drinker and a top racer. Carl is driven to build the Indianapolis Motor Speedway in a barren cornfield. The establishment thumbs its nose at them because they're mavericks who do things their way, but together they are a force to be reckoned with. Auto racing is a do or die arena, where one slight turn of the wheel or hesitation can mean the end of a career, a car, or a life.

This is the riveting story of the birth of the first super speedway. The year is 1910. The characters are tough men who aren't afraid to speak their minds or go after what they want. They live in an earlier time, in the infancy of auto racing, when people were willing to lay it all on the line and die for their dreams. Imagine millions of bricks making up the first Indianapolis Motor Speedway. Imagine you're driving the fastest car in the world. Imagine you could die trying to hold on to your championship title. Besides the compelling story of the characters, you have an interesting backdrop of how life, culture, and times were back then. As today, changes were happening rapidly in technology, culture, transportation, communication, commerce, you name it.

One of my favorite parts was about Barney sharing his early success with his father. In the end, the winner takes all, and it takes heart to grab onto it and make it your own. This is what these two men did for auto racing. They are imperfect and flawed, but that's what makes them interesting. Dill brings a fresh sense of energy and life to the story and characters, and it rings of realism and history. Photos accompany the book. For an entertaining, edgy book grounded in the history of auto racing, The Legend of the First Super Speedway by Mark Dill is one you shouldn't pass up. Fans of Ford v Ferrari will love this book.

The Legend of the First Super Speedway: The Battle for the Soul of American Auto Racing is a work of fiction set in the historical, sporting, and interpersonal drama sub-genres, and was penned by author Mark Dill. Written for adult reading audiences, the work does contain realistic instances of violent auto racing accidents, the use of explicit language throughout, and some moderate sexual references. Exploring the origins of American auto racing and super speedway just after the turn of the twentieth century, we find ourselves immersed in a rivalry between racers Barney and Carl. Neither of them fit the traditional mold of the racer according to Northeastern Society, but both of them drive themselves literally to the edge as they quest for glory.

Author Mark Dill has crafted a fascinating and truly high octane exploration of the many dangers and triumphs of the world of auto racing, especially at a time when motors, engines, and these kinds of speeds were still being tested and pushed to their limits. I found the work to be both entertaining and educational, as Dill strikes an ideal balance between the character development, their personalities and passions, and the exposition and discovery of racing history and the hardships and innovations of the time period. The action scenes are told on a genuinely terrifying level of visceral description and will have you on the edge of your seat with how unsafe and experimental everything was at the time. Overall, this results in a superb and informative sporting story, and I’d highly recommend The Legend of the First Super Speedway to racing fans everywhere.

The Legend of the First Super Speedway: The Battle for the Soul of American Auto Racing by Mark Dill is a historical novel that will entice fans of racing cars, a story with a setting in the years from 1902 to 1910. It is the story of two men who fought to create the Indianapolis Motor Speedway. Carl Fisher is a fearless man, driven, relentless, and ambitious, and someone who flirts with danger. His friend, Barney Oldfield, is an equally compelling character who takes orders from no one. It is the dawn of the twentieth century and these two men set out to create the first motor speedway from a fallow cornfield. But the auto-racing establishment has its misgivings about them. Will these rough men who embrace danger succeed? Follow a racing champion with a drinking problem and an unrealistic and driven entrepreneur as they are poised for the impossible.

The Legend of the First Super Speedway is adventurous and exhilarating — just like the racing experience — and the adventure takes readers across different cities: Michigan, Zanesville in Ohio, Ormond Beach in Florida, Savannah in Georgia, Indianapolis, Cleveland, Long Island, Brighton Beach, and others. It is set in a time when auto racing was not as regulated as it is today, with characters riding on wheels of wood and with no helmets. The massive engines were powerful and capable of setting off racers at an incredible and uncontrollable speed. Mark Dill’s novel is well-researched and it depicts an era in racing history that is exciting. The setting is beautifully explored, and I enjoyed the atmospheric writing and terrific descriptions. The characters are well-written and the story has an unpredictable plot, a strong conflict, and an adventure that is rollicking.

The Legend of the First Super Speedway is Mark G. Dill’s reconstruction of a momentous event in American auto racing. Dill brings to the surface the entertaining link between history and America’s need for speed. This historical account of how the Indianapolis Motor Speedway emerged is told from the point of view of auto racing pioneers Barney Oldfield and Carl Fisher. Oldfield, known as the speed king, was the first man to drive a car at 60 miles per hour on a circular track and made his career by setting speed records and conducting match races and exhibitions. Fisher, a promotional genius, worked at developing an automobile racetrack and paved the way for the Indianapolis Motor Speedway that revolutionized a course suitable for racing and testing. The story of these two daring men is forever etched in the annals of American auto racing.

The conflict not only alludes to the bureaucracies surrounding auto racing and the construction of the speedway. Writing without sugar-coating, Dill does not hesitate to cast the true nature of the real-life characters involved in this story. Here you will see Oldfield and Fisher in their flaws as well as their strengths. They are, in any case, prime examples of how reality celebrates flawed characters who manage to triumph against adversity. Historically, The Legend of the First Super Speedway captures a view of the formative years of auto racing of the 1910s, with its narrative that echoes the noise of motor engines. The passion to pursue one’s vision is what propels this real-life story. Get ready to become a spectator.

The Legend of the First Super Speedway: The Battle for the Soul of American Auto Racing by Mark Dill tells the story of two indefatigable characters who set out to build the Indianapolis Motor Speedway. Readers encounter Barney Oldfield, a racing champion who hardly stays sober and who takes crap from no one, and his friend, Carl Fisher, a relentless dreamer who has an unbridled love for adventure and is determined to build something exciting. The two are icons in the dangerous world of car racing in the early part of the twentieth century, a time when racing is very hazardous, with racers mounting cars with massive engines and wheels of wood. It is worth noting that racers never wear helmets at this time. The auto racing establishment of Northeastern Society sees them as westerners who are rough and reckless. But can anything stop them?

The Legend of the First Super Speedway is a hilarious tale of adventure that takes the characters across several cities and states. The setting is impeccably written and the author paints a world that feels real and that readers want to explore. For instance, the picture of 1901 Indianapolis is vividly designed and readers can easily imagine what auto racing was like at this time, a sport that had so many dangers associated with it. The historical setting is deftly written and packed with information that readers will want to know. The landscapes are vividly described and the setting comes alive as a world that is exciting and that has a life of its own. The writing is gorgeous, littered with dialogues that are well-crafted. While Mark Dill’s novel is filled with adventure and entertainment, it is an inspirational story that explores two characters who refuse to give up in spite of the odds. It is spellbinding and classic.