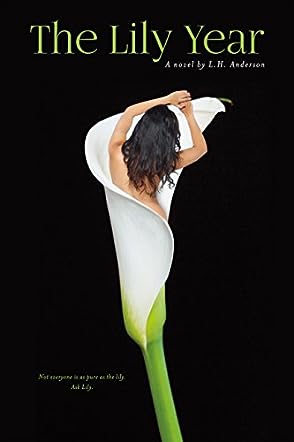 Linda Helen Anderson (nee Judkins) is an indie author and a resident of East Victoria Park in Perth, Western Australia.
Educated in the UK and with a bachelor's degree in English literature, Linda has lived in Australia since 1988, working in the West Australian law courts for much of that time.
Writing and reading is a passion for Linda and writing a novel was a dream for a very long time ... many poems and short stories preceded The Lily Year!
Linda is currently well into writing her second novel, yet to be titled, and is hoping to have this published by the end of 2016.

In The Lily Year by L.H. Anderson, life has a way of throwing you a curve ball. It happened with Lily when she was very young. As you can expect, it turned her life around and took it the other way. She was living, but barely. She was missing a lot and it was because of what happened all those years ago. Nevertheless, it's not the only thing that ruined her life after that “incident.” Apart from her confidence, she also lost her relationship with her mother. Her parents never survived the “incident,” and they soon became a dysfunctional family. And now, she has had enough. She will no longer let the past rule her. So in order to move forward, she would have to solve what happened all those years ago. This is the only way in which she can have a fulfilling life. And of course, with Justin’s love she can do it, can’t she?

Lily is among those characters you will remember forever. Even if you forget the name of the novel, you will remember her. She has that effect. There is absolutely nothing wrong with this novel. I loved the romantic elements, the mystery elements, and the action elements. It is a well-rounded novel that is as close to real life as it can get. You cannot help but be charmed by Lily; she actually reminded me a lot of Dean Winchester from Supernatural. Both suffered a lot, but hey, they get by tremendously, they are fighters and they have an awesome sense of humor. This book is simply, utterly great!

I don’t like lawyers any more than anyone else does. I’m not particularly fond of judges and courtrooms either. These are two reasons that I was more than a little surprised by how much I enjoyed The Lily Year by L.H. Anderson. Lily Cooper is a court reporter. She records everything said in the courtroom so that the typists can eventually put it into neat, precise manuscripts. Her best friend, Maddy, works in the same courtroom. She trains and reviews all the typists. Lily’s main romantic interest is a new judge who she literally bumps into one morning on the way to work. This may sound like an improbable start, but I’ll tell you a secret. Good writing can create a tale about anyone or anything interesting, no matter how awful or boring the situation or the people actually are.

Don’t worry. The characters in The Lily Year are actually great people. People you would like to really get to know. The situation isn't anything awful either. My point is that L.H. Anderson can write very, very well. The conversations between Lily and Maddy are sublime. In fact, all the dialogue stands out, as well as the characters. These characters have personality. Some of them even have wit. And L.H. Anderson knows how to show it to us in a way that makes The Lily Year shine. The Lily Year felt good. It made the possibility of real love seem likely. It even made lawyers look like nice guys. That’s great writing. This is a great book, no matter what genre you usually like.

The Lily Year by L.H. Anderson is a realistic, modern romance novel. However, it also contains an adult version of a coming of age story along with the dynamics of family relationships. The Lily Year generally follows the first person account of Lily and her life. Lily has gone through ups and downs in her life and doesn’t always share the closest relationship with her parents. Things are about to change, however, when a chance meeting introduces her to Justin. There is an immediate chemistry and their budding romance is portrayed alongside Lily’s own growth as a person. In addition to this, Lily is also coming to terms with her past as she struggles towards a better relationship with her mother, especially when illness in the family takes its toll. Can Lily and Justin’s love survive the odds? This is what forms the plot of the novel.

The Lily Year by L.H. Anderson is a typical girl meets boy story; however, there are a few things about it that set it apart. There is an added element of family dynamics and how our past experiences affect who we are today, and even our present day relationships. Lily’s character has depth and I especially liked Justin’s portrayal of a man in love. I did find the narrative to be a bit disconnected at times, but aside from that, it is an interesting read. Overall, if you are a romance novel fan, you will enjoy The Lily Year by L.H. Anderson.

In an intriguing and unusual new romantic read by debut author L.H. Anderson, The Lily Year is a book that readers will have a hard time putting down once they've started it. Follow Lily's story, a young woman who has experienced a devastating event in her life. Her parents want to pretend that nothing happened, and want the entire family to move on as before. But there is much more to Lily than meets the eye, and certainly more than the hand her past has dealt her. When she and Justin connect, it seems as if they might be perfect for each other. But things get very tough, and it seems as if things might never work the way Lily hopes. Will Justin and Lily's connection be too strong to break? You'll need to read the book to find out!

I very much enjoyed The Lily Year. Author L.H. Anderson has done a great job in creating characters, especially Lily, that her readers will connect with, relate to and come to truly care about. If that isn't a hallmark of a great author, I'm not sure what is. Her story is realistic, romantic, and will even have readers wiping away tears in parts. Any reader who enjoys romance, or who is looking for a good work of fiction in general, should absolutely give The Lily Year a chance. I am pleased to recommend this book to any such reader, and look forward to more from the very promising author, L.H. Anderson, in the near future.

In a lovely and interesting new entry in the genre of contemporary romance, The Lily Year by first time author L.H. Anderson is a book that many readers will find a very delightful read. Delving into the rather unusual relationship between Justin and Lily, the story recounts Lily's difficult history, and how it damaged both her and her family life. Lily's sense of humor through all of her difficulties touches Justin's heart, and he realizes that she might be exactly what he needs. But the couple goes through some major difficulties, and it seems unlikely they will be able to make it. Will they both be able to heal enough to move on together? Only time, and The Lily Year will tell!

I felt that The Lily Year was an excellent example of what a story of contemporary fiction should be. The story of the wounded Lily, still determined to live the best life possible, and the person who could be her soul mate, Justin, is one that will suck readers in from the very start and will keep them obsessively turning the pages until the very end. Those who love any form of romance, but especially those who like a realistic, modern day story, would definitely love this book. It's easy for me to be able to recommend this book. I certainly hope that author L.H. Anderson is already working on the next novel as I write this review. With talent like this, the author is unlikely to remain undiscovered for long!