Enrich Your Life and the World with the Game of Golf

by Stephen A. Vigiano 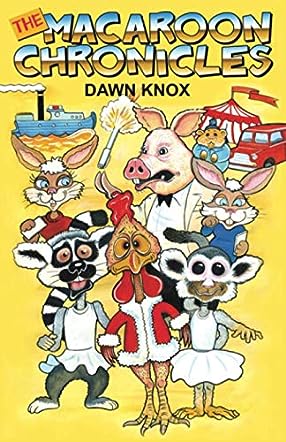 In The Macaroon Chronicles by Dawn Knox, with an important music festival in two days, a group of friends believes this is finally their chance at stardom. Introducing The Three Wise Monkeys, a music band, with Eddie, a Bald Eagle who has an uncanny resemblance to a chicken, Brian, Colin, and Gideon. The friends have many emotional triggers and downfalls that are very important to remember. For example, do not mention Brian's shortness, Colin is definitely a lemur, not a monkey, and if Gideon wants to use you as target practice, run for your life. Their chance at stardom at the music festival is nearly jeopardized when every route to the venue is blocked but they have an ingenious plan. They will take a boat named ‘The Saucy Tart’ across the river of custard. However, this soon turns into an embarrassing spectacle when Eddie almost drowns. The entire incident is witnessed by two rabbits, Deidre and Babs, and The Three Wise Monkeys find themselves trending on Facetube. They soon attract the attention of Mr. Krapowski where they sign the Deal of the Century. Unfortunately, the friends fail to read the small print. What can possibly go wrong? Now they must try to get out of the contract which sets them on a journey of one disaster after another, from an avalanche of chocolate, a lawsuit regarding clothing made of cheese, and an escape from aggressive armed badgers to joining the circus, being kidnapped by a family of bears, mistaken for one of Santa’s toys, and hiring a private investigator. Can the friends untangle themselves from the neverending cycle of catastrophes?

The Macaroon Chronicles by Dawn Knox is such a unique plot with unforgettable animals as the characters and scenery which is mostly edible. The dialogue exchanges between the characters are sharp and witty and will definitely make you laugh out loud. The characters have been created with a huge amount of imagination. I loved each and every one of the main personalities, Eddie, Brian, and Colin, but Gideon was definitely my favorite. The scene where Gideon confesses to failing the spy assessment and has to take a refresher course was hysterical: “I think I might have indisputably failed when I shot the examiner with my pen.” Every chapter was filled with fantastic slapstick humor, embarrassing calamities, and with every attempt to escape disaster they seemed to get themselves deeper into mischief instead of escaping it. I also loved Babs and Deidre, the unforgettable, sharp-witted rabbits. The chapter which followed their employment as Father Christmas and his helpers was extremely funny. If you love dark but intelligent humor, then you are going to really enjoy this well-written comedy. The descriptive narrative is superb and your imagination will definitely be sparked.