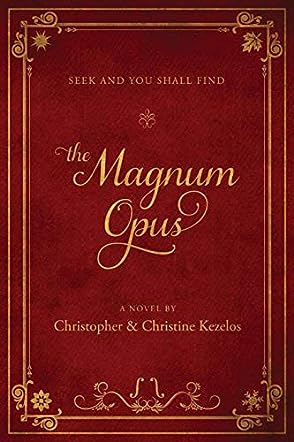 The Magnum Opus by Christopher and Christine Kezelos is a magical tale which follows on from a short film they made entitled The Maker. I found, however, that it is not necessary to watch the film as the book contains the narrative of the film and is self-contained. The story opens in the workshop of the Makers, where it is the job of the newly-created Maker to create the next - a process which has continued uninterrupted down the centuries. Melody, the latest Maker, studies the book of instructions, and, timed by an imposing hourglass, she creates the next Maker whom she names Ario. There is one small difficulty in his making - the musical note which is usually stamped on the Maker’s brow will not take, so she instead paints it on quickly just before her time runs out, and she disappears in a shower of sparkles and light. This small change in the process is to have astounding repercussions which will bring about incalculable changes to their world.

When Ario takes his turn to create the next Maker, he finds that he does not have the musical ability to bring her to life, and is swallowed up by a bright cloud before he can find any solution. The line of creation has come to an end and he wakes in a dismal town called Winter City, a place of ice and snow, peopled by equally cold denizens. Here he is put to work in a factory along with other Makers who have been transported before him, but his lack of musical ability makes him an outcast among his own people. In the city, he finds Melody, his own Maker, and together they embark on a perilous journey to find the Magnum Opus, the original Maker, to try to restore Ario’s musical ability and release their people, and perhaps their world, from the tyranny of the Winter King.

The Magnum Opus is a beautifully imagined tale which will warm your heart. Suitable for children of all ages and great to read aloud, it is a story which never preaches but nevertheless contains a strong moral thread. It is a story of good versus evil, of greed and generosity, of bravery and fear, of selfishness and of love. A seamless narrative will carry you along the exciting storyline, where you will encounter evil kings, merciless soldiers, trolls, and even a dragon. Christopher and Christine Kezelos have created an enchanting fable peopled with a cast of well-drawn, likeable (and some despicable) characters. I thoroughly enjoyed the book and would highly recommend it, no matter what age you may be.

Disappointed - the short film of "the maker" was visually stunning and filled with mystery. Was broken by the lack of love and decrictions of the makers world. The writing did not live up to the imagination of the creator. The world created felt generic. From such a wonderful concept, a mediocre world was birthed. I wanted to love this so much. It just didn't make it.