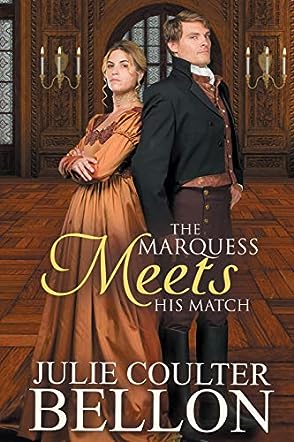 The Napoleonic Wars may be over but back in England, suspicion of France is still rife and Crown agents are working hard to keep their advantage over their French counterparts. At the highest echelons of English society, dukes, earls, and lords are all part of the spy network known as the Falcon Group, including, surprisingly, the beautiful and dangerous Lady Alice Huntingdon, daughter of the Duke of Huntingdon. In The Marquess Meets His Match by Julie Coulter Bellon, we meet the debonair and handsome former army officer Lord Christian Wolverton, known within the Falcon Group as 'the wolf.' A list of British agents is apparently being offered for sale to French intelligence. Such a list would be devastating to the Crown’s cadre of agents in Europe and would see the destruction of their spy network. Lord Wolverton, along with the Duke of Huntingdon and, of course, his beautiful daughter Alice must join forces to find the traitor and ensure his dastardly plan to sell the list fails. From their first meeting, it is clear there is electricity and passion between Lord Christian and Lady Alice. Both know, though, this connection must be put aside and they must work professionally as partner agents to capture and unmask the traitor before they can even consider the feelings that have arisen between them.

Although Regency romance is not my usual read, The Marquess Meets His Match by Julie Coulter Bellon was a very satisfying story. The author has a beautiful style that illuminates the opulence, power, and intrigue of the time. The descriptions of the properties, the clothing, and the styles were true to the period and remind the reader of the immense class gap in the country at the time. The sinister plot was well planned and contained enough twists and turns to keep a reader fully engrossed and turning pages rapidly to see where the plot was heading. As a lead character, Lady Alice was the perfect anathema of the time period when women were generally seen as delicate, fluttering creatures who could only be praised for their musical and artistic talents as well, of course, for their ability to produce progeny. Alice was anything but the shrinking wallflower. Confident in her abilities and training, she was ready and willing to serve her country and yet the author was able to infuse warmth and compassion into both her and Lord Wolverton that would have made them unusual for the period. For me, the highlight of the story was the delicate romance that blossomed between the pair, always attempting to be cognizant of the social mores of the time and struggling to subdue their natural desires for each other. This was an incredibly satisfying read and opened up a whole new genre for me as a reader. I can highly recommend this story.