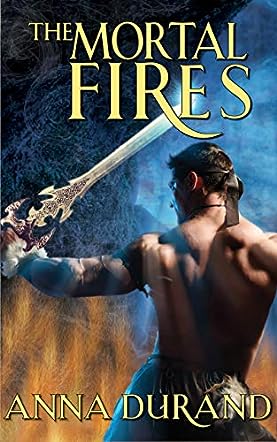 Anna Durand is an award-winning author of sizzling romances, including the bestseller Dangerous in a Kilt, recipient of a 2016 National Readers' Choice Award and an Honorable Mention in the 2017 Readers' Favorite Book Awards. Anna loves writing about spunky heroines and hunky heroes, in settings as diverse as modern Chicago and the fairy realm. Making use of her master's in library science, she owns a cataloging services company that caters to indie authors and publishers. In her free time, you'll find her binge-listening to audiobooks, playing with puppies, or crafting jewelry.

The Undercover Elementals series began as a short story, The Falls, but Anna soon realized Lindsey and Nevan deserved to have their whole story told. Her love of mythology and ancient history gave Anna all the tools she needed to flesh out the story into a full-fledged world populated with mystical beings and strange magics -- and plenty of steamy romance!

The Mortal Fires by Anna Durand is the second book in the Undercover Elementals series. Lindsey Porter was the Janusite, a mortal born with the powers of a Roman god. But she still had no idea what that actually meant, what was expected from her, or even how to harness this apparently legendary magic. As if that wasn't complicated enough, she discovered that her boyfriend Nevan, a sylph and one named king no less, had been keeping something from her, or someone of grave importance. Her name was Ceara, and she had come to claim what was hers: him, and the title of queen. She cares not that Lindsey is his soul mate, and she is not the only one to warn her away from the sylph king - the Oracle himself says he will be her destruction. Something dark has come to the realms, something with its vision trained on Lindsey's power, and if she won't give it willingly, then he will take it by force, and his reach extends far beyond what any of them could imagine.

Although The Mortal Fires by Anna Durand is the second book in the series, I just dove straight in, intrigued by the plot, and hooked from the first lines. The Mortal Fires holds it own. It is clear I've missed some key events, but all the information I need to fill in the gaps is supplied with style and ease, never breaking the flow of the story. Packed with suspense, mystery, romance, and that gnawing feeling of dread, The Moral Fires will compel you to read page after page, questioning what you think you know of the characters, wondering who can be trusted, and if the seemingly inevitable shall come to pass.