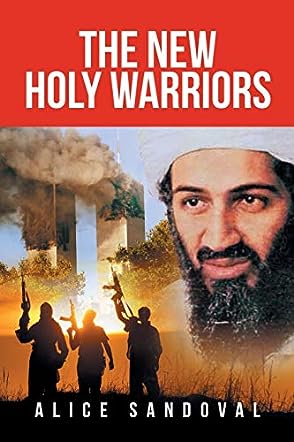 In The New Holy Warriors by Alice Sandoval, Dr. Sam Greenberg calls Marc Bravo, a 26-year-old Mexican-American attorney in California, asking him to come to Mexico City. Marc is surprised to get that call from Sam, who tells him that his parents have disappeared under mysterious circumstances in Mexico. They were said to be conducting a vaccination clinic at a rural village outside the Federal District. Sam wants Marc to go to Mexico immediately so Marc takes his brother, Richard, and best friend, Paul Levy, along with him to Mexico. The kidnapper, a sheikh who is a key Osama Bin Laden Al-Qaeda operative hiding out in Mexico, is anti-Christian and thinks nothing of beheading captives, especially Christians. As the plot unravels, Marc is exposed to radical Islam, their agenda, and their secret plans to implement the Koranic End Days World War III battle. Will he be able to save his parents?

The New Holy Warriors by Alice Sandoval is an engaging read inspired by true events. The story is gripping and throws light on radical Islam, the drug cartels of Mexico, and its mafia. Marc, his brother, and friend are graduates of the California National Guard, and trained in counter intelligence and guerrilla warfare. The story takes readers on a dangerous journey along with Marc, Richard, and Paul through the Mexican rainforest, the ancient temple ruins, the Mayan jungles, Saudi Arabia, Vatican City, France, Guatemala, Jordan, and the USA. The story has a lot of action, suspense, and intrigue that builds up a sense of urgency in readers and makes them curious to know what is going to happen next. The story also brings in an element of fear which makes it a riveting read. A good story for fans of political intrigue, terrorist and conspiracy plots with a dash of international and exotic locales.