The Night of the Eleventh Sun 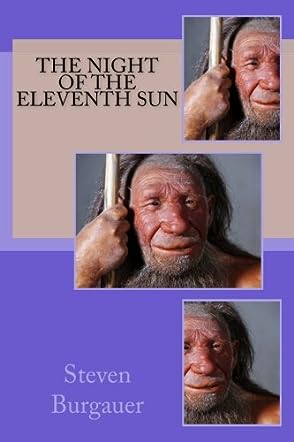 The Night of the Eleventh Sun by Steven Burgauer tells the story of one of the few remaining Neanderthal clans living somewhere in Europe 30,000 BC. We learn what they ate, what they wore, their customs, practices and beliefs. Strong Arms is the leader of the clan, and for many years he has been mated with Brown Curls, the daughter of the previous clan chief. She has given birth to six children, two of whom died young. It’s the story of early man, living in survival mode, finding enough food to eat - these were pre-pastoralists, still at the hunter-gatherer stage of evolution. The title of the book is taken from the rites of passage of Fast Foot, for eleven suns had passed since his birth. Time is calculated by tying a knot in a long piece of leather, one for each year, along with other decorations which marked important events. But the small tribe is in trouble; there are now three young people in the clan who are ready to mate and, since an earlier fight over Brown Curls which had split the tribe, there were no suitable mates.

Steven Burgauer has done an excellent job in The Night of the Eleventh Sun, taking us back to the days of the early cave man. What I found particularly interesting was the explanation of their behaviours, for example why they ate the brains of deceased tribe members, how they coped day to day, why they didn’t name their children until they were off the breast at three years old. The author parallels this with the way the ‘moderns’ react and explains how underneath our thin veneer of our present stage of ‘civilization,’ our brains are hard wired in much the same way. Mentally, man has not really changed all that much in 30,000 years. While many of their rites and practices would appear brutal and harsh these days, we can understand the reasons for their behaviour. The bottom line is the survival of the species, the passing on of the strongest genes for the next generation. Today we would refer to them as primitive people, but although they did not understand the science of ‘how or why,’ they understood the rules and knew death was the price to pay for ignoring them. I loved each and every character; they all had their own personalities and endearing qualities. I learned a lot from reading this book, that honey can be dangerous, meat cannot be ingested without fat, but it was all wrapped up in a delightful story. The tribe’s problems escalate when a more advanced tribe spots them, but I’m not going to give any spoilers away here. Five stars for sure.