From the Womb to the Tomb - The Tony Lester Story H.O.P.E. for the Alzheimer’s Journey

by Carol B. Amos Parenting in a Pandemic 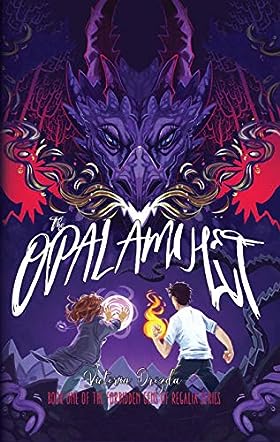 The Opal Amulet by Victoria Drozda is the first book in The Forbidden Gems of Regalia series. Emberly Tollens keeps having the same dream which is a sure sign that things are about to get worse. Little did she know just how right she was. The horrific turn of events within her dreams is only the start of her troubles which take a turn when she discovers an opal amulet. Suddenly, she's confronted by a very real dragon and helped by a boy with fire coming out of his hands. Emberly's thrown into a world where magic exists and discovers her own place within it, including her own family's legacy. She turns to her best friend and the mysterious stranger that saved her life to help stop a dangerous threat fast approaching.

The story weaves between three primary perspectives: Emberly, Max, and Olive. Each is facing a journey where they're exploring, making their own choices, self-discovery, and coming-of-age. Emberly's journey is one rooted in destiny, magic, and family legacy that opens her world up to new dangers and empowerment. Her ordinary life is literally tossed aside the moment a dragon attacks her, changing everything she knows and setting the spark that brings the story forward. Olive is Emberly's best friend and from Emberly's perspective, you see her kept in the dark about magic and the events unfolding. Through Olive's perspective, you see a twist that shows Olive has her own secrets that connect with Emberly's and she may know more about what's going on than anyone else. Max is the mysterious stranger, a hero that swoops in just when she needs it as his introduction has him fighting a dragon. Emberly's dreams provide a background of eeriness and coldness which Victoria Drozda uses to set up the danger that runs through the story. The magic within the world is charming with magical books, dragons, fire powers, and even more that bring the story to life on the page. The Opal Amulet is a brilliant start to a series with a mystery surrounding an amulet, magic, endearing characters, and coming-of-age journeys.