The Freight Train in the Sky Baby Out Of Wedlock 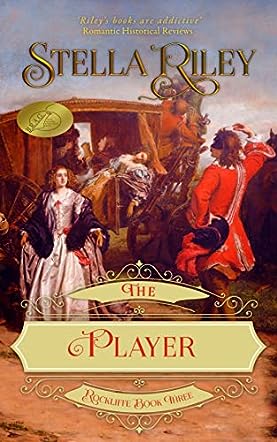 To a degree, The Player was inspired by the legend of Claude Duvall and William Powell Frith's painting of it - as seen on the cover of the book. My hero, Adrian has the ability to play many roles ... but less comfortable with being himself. I had fun writing this book - though I was aware of taking a few risks.

Tragedy, revenge, greed and a wealthy young woman struggling to find her place in society sets the stage for The Player: Rockliffe Book Three by Stella Riley. After the tragic death of his fiancée, and shunned by his family, Adrian Sinclair Devereux was forced to seek exile in France. Here Adrian scripted his own life known as L’Inconnu, the Actor. Only after the death of his brother is Adrian willing to come home to accept his new role as the Earl of Sarre. Cautiously, Adrian eases himself back into society when he sees his old friend turned enemy, Marcus Sheringham, setting a delicious trap to ensnare Caroline Maitland, heiress to a wealthy wool merchant. Sheringham wants Caroline’s fortune to clear his mountain of debt. However, Caroline finds herself completely besotted by a charming young French highwayman who steals her heart and ruby ring. Never assuming she would find true love, Caroline’s world is turned upside down as the curtain rises, the cast is assembled, and waiting in the wings for his grand entrance is Lord Sarre. What will await the characters when the curtain goes up?

This is an incredible, page turning historical romance by Stella Riley. The Player: Rockliffe Book Three held me captive as if under the spell of Claude Duvall, the charming French highwayman, until I had finished the last page of this historical romance. I was completely absorbed into the lives of Adrian Devereux, Caroline Maitland and Marcus Sheringham. As the curtain rose on each scene, the author depicted the beautiful gowns, hair styles and settings of the period in fantastic detail. Stella Riley definitely brought her characters to life from the very beginning. I cheered Adrian on, and yet my heart held sympathy for the injustices he had faced. Marcus Sheringham is the complete opposite of Adrian, and only views Caroline as a perfect solution to his mounting debt. Unaware that Caroline has her own mind about marriage, Marcus is faced with events that will forever change his life. I found it difficult to put The Player down. When I did, it called me to go back to the stage set by Stella Riley and wait for the curtain to rise. The Player is a wonderful story, and I will read more by this author.