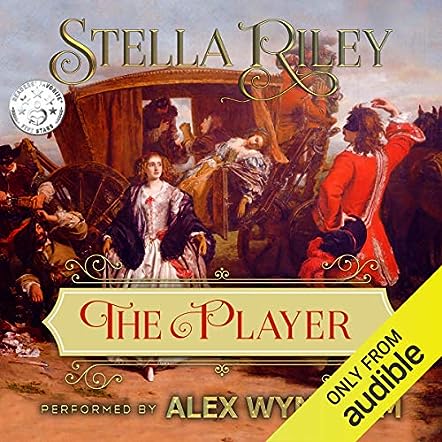 Readers' Favorite award-winning author and B.R.A.G. Medallion honoree Stella Riley trained as a teacher in London and now lives in Kent. She enjoys theatre, dancing, reading and travel. She is fascinated by the English Civil Wars and has written six books set in that period. She loves the extravagant fashions of the mid-Georgian period, likes men with long hair and her current passion is for Baroque harpsichord music.

The first 5 books of the Rockliffe series (recommended in The Times newspaper!) are also available in audio, narrated by Alex Wyndham. And Rockliffe Book Six - CADENZA - was released today - November 22nd.

Visit Stella at https://stellarileybooks.co.uk for all the latest information on her books and her 'Who's Who' and Extras pages.

A man must face his tragic past to take on his responsibility as the rightful heir of an Earl in the historical romance audio novel, The Player by Stella Reilly, narrated by Alex Wyndham. Running from his devastating past, Francis Adrian Sinclair Devereux took on the role as a performer, L'Inconnu, famed actor of France. Ten years later, he has been summoned home to take his rightful place as the Earl of Sarre. Apprehensive of his reception, but with a deep sense of responsibility, he arrives back in London, England with his only friend and confidant, Bertrand. Struggling to forget his past and become the man he is expected to be, Adrian discovers that being an Earl is his hardest role yet. Taking over his estate is far more straightforward than making the social rounds in his new position. Hopelessly searching for a somewhat decent woman to take as his wife, Adrian is surprised at his reaction when former nemesis Marcus Sheringham makes clear his intentions to marry young Caroline Maitland.

With rumors flying around concerning Caroline's reputation as the granddaughter of a wealthy wool merchant, Adrian is confident that Marcus is after Caroline's substantial dowry. Struggling with his conscience and his heart, Adrian finds himself oddly drawn to the rather plain Caroline and her honesty. Only, he must choose whether he is willing to risk his new position as Earl of Sarre and warn the starry-eyed Caroline, or keep quiet and not dredge up the painful and possibly damning past. In an unprecedented turn of events, Adrian must rely on the help of the Duke of Rockliffe and the ever-loyal Bertrand. Will the cold, calculating Earl of Sarre allow his heart to thaw in the warmth of Caroline's trust and humor? Or will he choose to remain bitter and distant, holding love at arm's length?

A romantic fling with a highwayman turns into an impromptu marriage of convenience. As the third novel in The Rockliffe Series, this installment does not disappoint. Adrian Sinclair thought he had enough problems when he arrived in England, but he was far from prepared for what lay ahead as he took on the role as the Earl of Sarre. With fully fleshed out characters, a well thought out plot, and a sinister villain, I enjoyed every aspect of this book. Adrian portrayed the tragically lost hero against Marcus' devil-may-care selfish playboy with a loose sense of morals, tying in with the rather innocent Caroline, wholly completing the love triangle. With lies, misconceptions, and slight deceptions, the characters knot their fates together until they must face the inevitable outcome. Another impeccably written novel, narrated by a beautifully talented actor. The narration is skilfully performed by the inimitable Alex Wyndham, whose brilliant talent adds an uncanny depth and realism to both characters and story, engaging the listener with his charming accents and voices. Mr. Wyndham's flair for multilingual accents captivates his listeners, affecting his readers long after the book is finished. Although the story only possesses one mature scene, I recommend this book to adult readers.