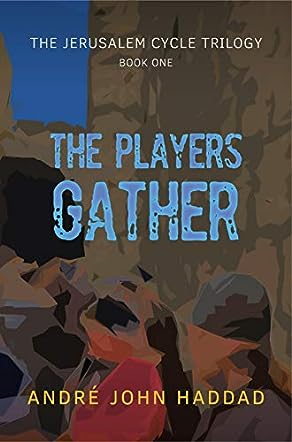 André John Haddad woke up one morning with the complete storyline of The Jerusalem Cycle Trilogy in his mind. When the idea had evolved into a partially completed manuscript, André interviewed a former ambassador to Israel, asking him if he thought he would see peace in the Middle East in his lifetime. The ambassador was surprised and terrified at his own response. Right then and there, André knew that he had a story worth telling.

André is an industrial psychologist who lives in Ste-Adèle, Québec with his wife, Louise, and is currently working on his follow-up series of Louise Destrey thrillers, including the soon-to-be-released The Thirst.

The Players Gather is a work of suspenseful dramatic fiction penned by author André John Haddad, and it forms the first book in The Jerusalem Cycle trilogy. Psychological, political and international in its nature, this complex and thought-provoking adventure novel takes on the controversial theme of unrest in the Middle East in a brand new way. Jerusalem is a city at the center of conflict, as it has always been, but when supercomputer Lola predicts an imminent disaster, a collection of ‘players’ from different walks of life engage in a mission to save Jerusalem and clear its conflict before the threat of nuclear disaster becomes a painful reality.

Controversial in its conception, The Players Gather is by its very nature a story that not everyone will agree with or enjoy, but author André John Haddad writes with clarity and sensitivity on the issues he wishes to present. The plot itself is very exciting and engaging to read, combining real-world events of the past with current attitudes, but also high levels of technology and new world thinking patterns that attempt to make a better future by their so-named ‘crusade’ to the city. The character development is powerful, particularly in Louise Destrey, embodying a sense of fear and a desire for peace that is highly realistic and endearing for readers to bond with. The Players Gather is a long and complex read which will certainly please fans of literary suspense, high detail levels, and political conflicts, making for a successful opening to a controversial trilogy overall.