The Positive Impact of Modern Liberals 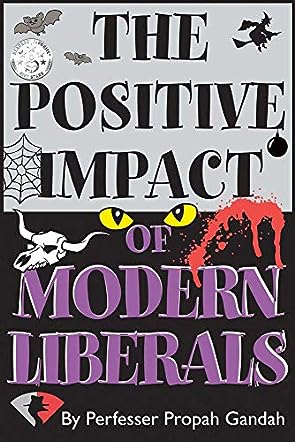 It was time for this practicing conservative to become more active in the detestable political arena . . . by mocking every bit of it! Consuming the liberal media's version of 'the news' is NOT informative; voting against admitted democrats every election is NOT enough; and simply being a conservative today is apparently grounds for persecution, or worse! So- rather than acting like a selfish liberal terrorist and going out to loot, to destroy, and commit mayhem and anarchy, I wrote a book. Please join me (if you dare) in exposing and mocking the absurdity and dangers of establishment liberal dementia!

The Positive Impact of Modern Liberals by Perfesser Propah Gandah begins with a powerful, somewhat hilarious declaration that sets the tone for this wonderful work: “What can I say? I like to tease liberals . . . makes me politically erect. And, after all that has happened in just the last ten years or so, we practicing conservatives deserve more of an outlet than just voting against Admitted Democrats every two to four years.” This is a very sarcastic work that ridicules a lot of what readers know and think about liberalism, a tome that will appeal to both fans of politics and commoners who watch the political game from a safe distance. You’ll find a lot to make you think and laugh in these pages, a book that is laden with tons of humorous sayings, witticisms, observations, and thoughts about politicians, political ideologies, and what it looks like when it comes to actually putting the thing into practice.

I started smiling from the very first page as the author tells readers some startling facts — observations. “To avoid criticism, a democrat becomes a liberal. To avoid failure, a liberal becomes a progressive. To avoid shame, a progressive becomes a socialist. To avoid ridicule, a socialist becomes a ‘democratic’ socialist, and on election day, votes for democrats!” As one reads from page to page, one is compelled to look at the political reality, the media, politics, religion, the government and a lot more in a completely new light. Perfesser Propah Gandah’s The Positive Impact of Modern Liberals offers a refreshingly new take on politics and examines the idiosyncrasies that fuel the very culture that rules today’s American society. This one was a hilarious ride, a humorous, sarcastic book that will set spirits wild with laughter, provoke genuine thought, and entertain readers more than anything they have read in politics. Written in a sharp, unforgiving tone, here is a book that challenges all you ever knew about liberals.