A Rainy Night in Georgia 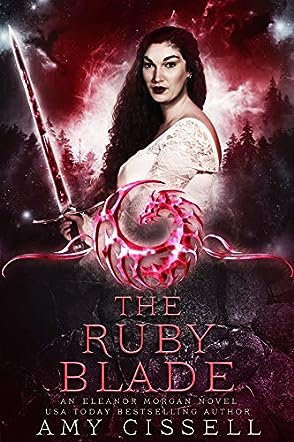 The Ruby Blade by Amy Cissell is the continuation of the fantasy tale of Eleanor Morgan and her quest to reopen the gates and allow magic back into the world. Eleanor, a Fae Princess, and her sidekicks, Florence, a mage, and Raj, a thousand-year-old vampire, are joined in this episode by Emma, a werewolf, the former girlfriend of Eleanor's werewolf mate Isaac, who is currently being held by the Dark Queen and being horribly tortured. In The Ruby Blade, Eleanor will open two more of the gates, travelling across the eastern seaboard of the United States to do so, a country that has lost most of its technology due to the power of the magic she has released back into the world thus far. Raj will continue his ongoing efforts to try to woo Eleanor away from her mate bond with Isaac, as the sexual tension ramps up in this iteration. Arriving late to assist is Raj's daughter, Petrina, herself a powerful vampire and mage.

I thoroughly enjoyed the previous episode of this series and was keenly anticipating the next two gates being opened. Amy Cissell does not disappoint with The Ruby Blade. The characters continue to develop and I particularly love the simmering relationship between Raj and Eleanor as she tries to deal with the many twists and turns this story takes. Emma is a welcome addition as a character, and some of the best dialogue in this book is the snarky and sarcastic to and fro banter between Isaac's ex-girlfriend and his current mate. This is an epic fantasy and fans of magic and mayhem will lap it up, but the by-play and the strong, positive characters, especially the women, are so refreshing to read. This is one of those books that is impossible to put down as one exciting scene just literally drags you into the next, but for readers with a thirst for witty, sassy, dialogue, that's all here too. I cannot wait for the next edition of this tale, where Eleanor will attempt to open the next gates - what trials and tribulations will befall these characters that I've grown to love and hate. Excellent stuff from Cissell.

The Ruby Blade by Amy Cissell is part of a series that I wish I had gotten in on from the very beginning. Don’t get me wrong. It is a complete story in and of itself. But I would have loved to watch the story and the relationships form and become concrete. I like this book. It has a depth and complexity that a lot of fantasy novels don’t. That is why I will go back and read the first two books, and follow the quest to what I am sure will be an epic conclusion. I had never heard of Amy Cissell until I picked up this book, but she writes well. Well enough that I will look out for her books in the future. I feel lucky to have found her. Authors writing this well are rare and should be treasured.

What I liked most about The Ruby Blade are its characters. There are a lot and they are from a lot of different species. When you have dragons, elves, fae, werewolves, and others, all with human forms of themselves, and all with their own unique supernatural abilities, and their own distinct personalities, it can get a bit confusing, which brings me to the next thing that I liked about The Ruby Blade. Amy Cissell does not let it get confusing. Everything is laid out beautifully by this master craftsman. The plot moves along at a steady pace. The characters change and grow. The sexual and emotional tension remains constant. A great book by a great writer.

Amy Cissell's The Ruby Blade (An Eleanor Morgan Novel Book 3) is an adventure-packed, fantasy romance that focuses on Eleanor Morgan's quest in opening the gates and battling those who prefer to keep them closed forever. It is made even more complicated by her relationship with Raj. With her mate, Isaac, trapped in a different plane, Raj patiently pushing her feelings over the edge, and Florence's warnings about the vampire, Eleanor finds herself conflicted. Unfortunately, her troubles do not end there, as she is followed by a chill that constantly threatens to send her into hibernation, and she's faced with even more tough decisions and trials as the story progresses.

Cissell has an eye for both fantasy adventure and romance. Her writing is superb and she has me hooked with this series. This book combines the genres seamlessly, the plot is explosive and exciting, and there is never a boring situation in this beautifully written piece. The characters are well developed and properly conflicted when faced with situations out of their grasp. The Ruby Blade continuously kept me guessing in a way that made it hard for me to put the book down. I understood Eleanor's confusion, anger, and wariness as she constantly tried to understand why she found herself in a difficult situation and had to carefully pick the people to trust. Despite all she's been through, she tries to remain strong and faces her troubles head on. I feel as though Cissell has big plans for the future of this series and I can't wait to see what she has in store for us next.