The Unveiling: A Place Where Pain & Passion Collide The Other Side of Certain The Ballad of Before The Translucent Boy and the Man Who Walked to the Moon

Mystery of the Secret Queen 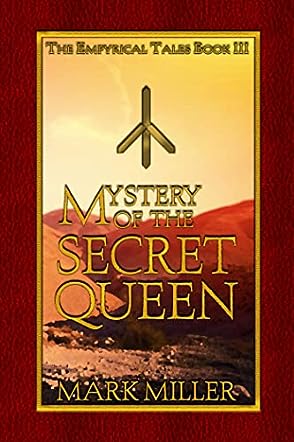 Originally from Kansas, Mark has lived in Florida since 2006. He has achieved some success as a Kindle Best Seller and having one of his short stories selected as a winner in the Florida Writer's Association Short Story Collection. Growing up in Kansas, Mark graduated from Sumner Academy of Arts and Sciences and received his Bachelor's in Film from the University of Kansas. Mark has written numerous novels, screenplays, short stories and digital series. Many of his stories are geared for the classroom. He has explored his spirituality, writing both with his father and daughter. Inspirational stories with positive messages are his goal with everything he writes.

The Secret Queen by Mark Miller is Book III in The Empyrical Tales series. It follows The Fourth Queen, Book I, and The Lost Queen, Book II. Coming soon is The First Queen, Book IV. While it would probably make more sense to read the books in order, I found The Secret Queen to stand alone quite well. There were a few names and incidents mentioned that meant nothing to me, but they did not detract from the flow of the very engaging story.

In The Secret Queen, seven-year-old Olena was the acknowledged Queen of the Eastern Sky, but had already spent an entire year in training under the three other Queens of the domain. Despite her young age, Olena was faced with incredibly challenging situations that required her to make right choices for the benefit of the land. She had learned scarcely any magic, and even the magic she could do was unreliable. Regardless, she was called upon to undergo a quest that took her deep into hostile territory. Not only did she face hostile people, but the terrain itself was almost insurmountable. With the help of Sylvan, a living wooden doll, and Kez, a fuzzy quzzak, Olena managed to do a lot of growing up while on her quest.

Mark Miller has created a vividly detailed world, filled with equally detailed creatures, all of which bring this story to life. I was captivated by this remarkable fantasy, and literally had to read it cover to cover in one sitting, because there was no point at which I was comfortable putting down the book until later. Miller has a lot of whatever it is that makes a good fantasy writer. Genius, perhaps? Fathomless imagination? Tremendous drive? Whatever the secret is to writing great fantasy, The Secret Queen is the result. I most definitely recommend this series to fans of fantasy, and to anybody who is just curious to find out what good fantasy is all about.