The Shadow Beneath The Waves 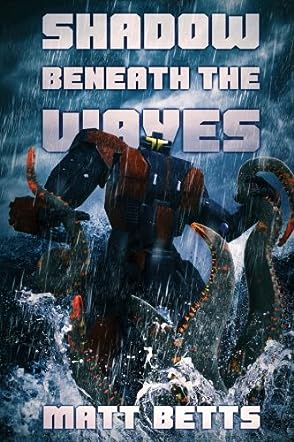 Matt Betts is an Ohio native and a pop culture junkie. He loves monster movies, comic books, and science fiction. His books include Odd Men Out, Indelible Ink, The Boogeyman's Intern, and The Shadow Beneath the Waves.

Shadow Beneath the Waves by Matt Betts is set in the near future, a few years after the awesome fighting machines known as Cudgels helped win what no one wanted to call the Third World War. One of their Cudgels went missing in the dying days of the war, and Martin Taylor and his crew aboard the salvage vessel Adamant have just found it. But Cudgel A-9 has a secret. It didn't go down alone. All those years ago, the brave pilots of A-9 made the ultimate sacrifice, using the body of the Cudgel itself to trap a monstrous creature deep beneath the waves, and in their desperation to save a dying friend, the crew of the Adamant has just turned it loose.

The story sounds like a throwback to the good old days of dime novels and creature features, but there's so much more to Shadow Beneath the Waves than that. Betts can clearly write action, and he upped the creepy factor by throwing in some close-quarter battles with a decidedly smaller menace that I'll let you discover on your own, but it is the interplay between his diverse cast of characters that truly made the story shine. Quirky, funny, sarcastic, at times downright pugnacious, every one of these characters rang true, and they elevated this book to something more than just a race against time and the possible (probable?) face-off between two super-sized behemoths. I had a lot of fun reading Shadow Beneath the Waves, and I know it won't be the last book I read by Matt Betts.