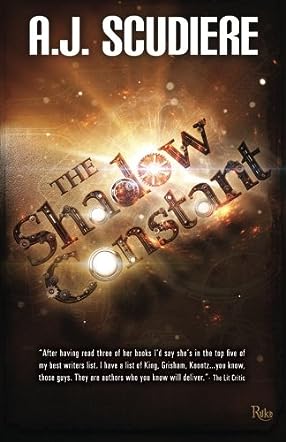 The Shadow Constant by A.J. Scudiere is a fascinating story which may, in fact, be rooted in historical fact. Scudiere has created characters as varied as any like number of real people, and placed them in a situation which, although certainly not common, is as believable as any story you’ve heard or read. By fortuitous circumstance, Charlotte “Reenie” Temple Carroll inherited Hazleton House, an antebellum plantation mansion which had belonged to her ancestors back in the 18th Century. With her boyfriend, Evan Reeves, and his sister, Kayla, they hired a historical expert to help them restore the mansion to its legitimate period condition. Dr. Ivy Lopez was a young woman who was a stickler for authenticity, as was Reenie. But once they started tearing down walls which had been erected much later than the original mansion, they began finding interesting, and sometimes significant artifacts hidden within those walls. Some of these were suitable for display in the museum Reenie wished to make of the house, while others seemed to almost be hidden evidence of a crime. But of all their many discoveries, the blueprint behind a loose stone in the fireplace was by far of greatest significance to the friends and to the world at large. However, as they subsequently learned, people had previously been killed over that blueprint, and as Kayla, a brilliant engineer with Asperger’s, began to build the machine represented by the blueprints, the four became targets for considerable harassment, theft, vandalism, spying, and even kidnapping and attempted murder.

The Shadow Constant by A.J. Scudiere is a brilliantly conceived and written novel, intensely riveting, and thoroughly engaging. This is a must-read novel eclipsing many other “must-read” novels. Scudiere’s attention to detail presupposes personal knowledge of an authentic antebellum plantation mansion transposed to the pages of this book. If you can read only one book this year, The Shadow Constant would be an excellent choice for that book. It is a classic “David vs. Goliath” story situated in today’s world.