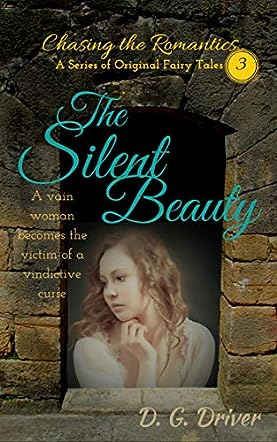 Colleeda is a very vain and selfish young woman. It doesn’t help that she also has a beautiful voice which she uses to bewitch young men, whom she treats badly then dumps mercilessly. And, she’s wealthy. Or, at least she was initially after her parents died and left her the fine house on the hill, the servants and stables and lots of money. Only Colleeda, in her vain attempts to be even more beautiful, flaunts her money with random abandon and soon finds herself destitute, with no servants, no stables and very little money to keep going. But she does and she continues to bewitch young men with her beauty and her lovely voice. An unknown witch takes action, cursing the girl to teach her a lesson and a tragedy unfolds, a sad story of Colleeda’s downfall and redemption. Did Colleeda deserve the curse? Would it make her a better person?

D.G. Driver’s classic fairy tale, The Silent Beauty, is the third book in the Chasing the Romantics, A Series of Original Fairy Tales. Like the first two books in the series, The Royal Deal and The Tomato Quest, this author follows the classic formula of a fairy tale to create a compelling story with valuable lessons. With a well-structured plot and well-developed characters, this story is rather sad. In spite of disliking the vain, selfish woman Colleeda has become, a character the author thoroughly describes and develops, the reader wants to like her, wants to find some redeeming quality deep within. As the plot thickens, the author creates some subtle changes to Colleeda's character, first making her pure evil, then creating a character that redefines herself and overcomes the tragedies that robbed her of what she loved the most. The message or theme? That self-centered vanity and selfishness really isn’t a beautiful trait. True beauty lies deep within, as the well-known line from another classic fairy tale suggests: “Mirror, mirror on the wall, who’s the fairest of them all?” A well-told classic fairy tale with a solid plot, realistic characters and lots of action.