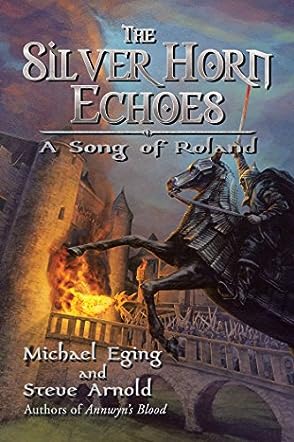 Michael is a screenplay writer and novelist. The Silver Horn Echoes: A Song of Roland is based on his award winning screenplay, and inspired by La Chanson de Roland. He is co-author of Annwyn's Blood.

The Silver Horn Echoes: A Song of Roland by Michael Eging and Steve Arnold is a book for those who are into well-crafted and tightly plotted historical novels. Set against a turbulent period in the Dark Ages, readers follow compelling and memorable characters in a world where intrigue and stabbings-in-the-back are frequent. Roland is heir to the Breton March, but while the Frankish kingdom is preparing for an impending war, he is given the most unlikely of tasks — to serve as a guard. When he learns about a new threat to the kingdom, he must do everything in his power to save his people. But this isn’t an easy task, as he is faced with ruthless enemies within the kingdom itself, and he must unveil the plots of a murderer who could be setting himself up for the most powerful position in the entire kingdom. Does Roland have what it takes to protect the kingdom, founded by Charlemagne, from being torn apart?

I have always been fascinated by the Dark Ages, by its rule of power, and by the intrigue that is witnessed in high places. This book explores this age in vivid detail and with forensic clarity, and the reader falls in love with the compelling characters without knowing why. The writing is beautiful and it features linguistic elements that reflect the setting. The Silver Horn Echoes: A Song of Roland is a work of great imagination, nourished by history, a story with a powerful conflict, laced with intense action and twists that are as surprising as they are delightful. Michael Eging and Steve Arnold bring readers great entertainment, taking them on a whirlwind journey back to the Dark Ages, and putting them alongside some of the most memorable historical characters.