The Mad Days of March 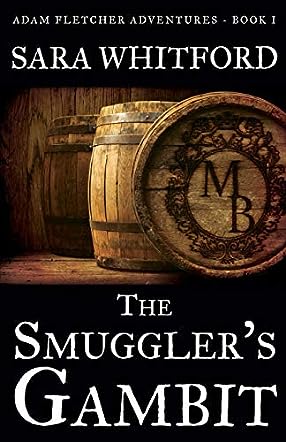 Sara Whitford's third-great-grandfather wrote their family lineage in a tattered, old copy of Robinson Crusoe. Adventure, literature, and history are in her blood.

Ever since she can remember, she has been fascinated by the intriguing past of the coastal North Carolina region that has been home to her family for centuries. How could she not be, with stories of intrepid explorers, Indian kings, and ordinary Bath town boys-turned-pirates-like that notorious sea rogue known as Blackbeard?

In her Adam Fletcher Adventure Series, Whitford weaves together colonial-era tales that incorporate true life (but often little known) historical facts with stories and characters inspired by her own decades of research. You can visit her online at SaraWhitford.com or visit the website for the Adam Fletcher Series at AdamFletcherSeries.com

The Smuggler's Gambit (Adam Fletcher Adventure Series Volume 1) by Sara Whitford revolves around seventeen-year-old Adam Fletcher, and is set in 1765 against the backdrop of Port Beaufort, North Carolina. Adam gets into a fist fight with Francis Smythe in his desire to defend his mother and is forced by the local magistrate to be a shipping apprentice to Emmanuel Rogers, an old man. Things take a different turn when he is asked to spy on his master and Adam is caught between being loyal to his master and performing his duty as a citizen. Which one will he choose? Will Adam betray his master or listen to the higher authorities and spy on the old man? As the story progresses, readers get to understand Adam Fletcher more and the test of his character.

The plot is compelling with many layers, not only in the story but also in the way the characters are portrayed. The book has a blend of everything – adventure, history, mystery, suspense and romance - which makes it fast-paced and entertaining. The author weaves in all the emotions, facts, fiction, and action seamlessly, without sounding forced. From the moment where Adam Fletcher is kidnapped till the very end, the book will hold the attention of readers. Adam Fletcher’s complex character, his growth as a person, along with the colonial era, the authentic historical setting, and the sea faring adventure give the plot its uniqueness and originality. Readers will be waiting to read the next book to learn more.