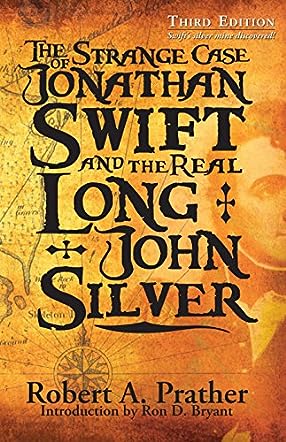 Since the late 1700’s, lurid tales of a fabled treasure and a legendary fortune-hunter named, Jonathan Swift, has enticed untold numbers to search for his veiled cache.

The breakthrough and highly controversial discoveries presented in Robert A. Prather’s book, "The Strange Case of Jonathan Swift and the Real Long John Silver," has attracted a nation-wide audience, and was featured in February 2012 on the popular History Channel 2 series, "America’s Book of Secrets;" the Fort Knox Episode. In addition to receiving the prestigious Reader’s Favorite Silver Medal Award, Historical/Cultural category, this book has also won a Silver ADDY Award for publication design.

From rare historical documents and maps, to personal diaries and archives from George Washington’s Masonic lodge, the author boldly delves into the mystery and legend of Swift, as well as the incontestable storyline connections with Robert Louis Stevenson’s classic adventure, "Treasure Island." Was Jonathan Swift the mold for Stevenson’s most famous literary character, Long John Silver? Prather reveals and documents the location of the long-sought Swift silver mine, moving the enigmatic silver miner out of the mythical and into the historical.

Mr. Prather and his wife, Karen, reside near Garrett, Kentucky. He is a member of local historical and archaeological organizations and works with Acclaim Press of Morley, MO developing county history books.

"The Strange Case of Jonathan Swift and the Real Long John Silver" by Robert Prather is a fascinating look at an old Kentucky legend. Most readers will be familiar with the name Jonathan Swift. However, this is not the Jonathan Swift that wrote "Gulliver’s Travels" but the Jonathan Swift who is thought to have discovered a silver mine in Eastern Kentucky around 1760. Long John Silver was a fictional character in the novel "Treasure Island" by Robert Louis Stevenson, or was he? Could Long John Silver and Jonathan Swift be one and the same? Prather takes the reader on a journey filled with legend, speculation, documents and research. Swift owned thousands of acres in Kentucky. Legend says that he found a silver mine in an effort to escape a bear. He buried the treasure close to the Hardin and Breckinridge county line, where four towns come together: Eastview, Westview, Centerview and Grandview.

The cover of this book screams to be picked up and read. The background looks like an old faded treasure map. The author has provided photos, maps, copies of news articles and a lot more. The narratives were my favorite part of this text. Many had a humorous tone and all added much to the history of the legends. Prather’s thesis questions whether Jonathan Swift was a pirate who used his trips to Kentucky to hide his ill-gained loot. He also questions whether Stevenson modeled his character Long John Silver after Swift. Could Stevenson have left encoded clues in his book "Treasure Island"?

I live on the Hancock Breckenridge County Line, so naturally this book was of interest to me. I applaud Prather for the enormous amount of research. His book is well-organized and presented. History buffs will love this book. Would the treasure hunters want to buy a copy? Perhaps they will be the lucky ones to find where the treasure is hidden.