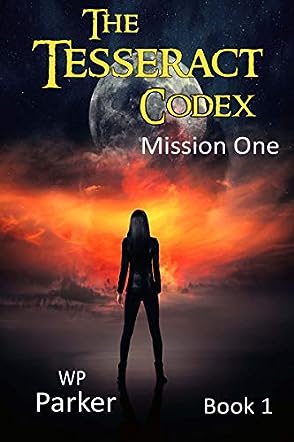 Native Western New York author, and world traveler, Bill Parker, spent most of his career engineering high-tech manufacturing systems for companies around the world. An accomplished deep space astrophotographer, he was a contributing editor for Modern Astronomy magazine when it was based in Attica, New York, working mainly on astrophotography articles and projects.
Bill Parker has been a Black Belt in Isshin Ryu Karate and a martial artist for more than forty years. The times when all that stood between him and certain death was his martial arts gave Bill the indomitable spirit that pervades his thinking and writing to this day.
Bill calls Earth his homeworld, but he is a steely-eyed outworlder to the very core of him.

The Tesseract Codex: Mission One is a work of fiction in the science fiction genre, and is intended as the first installment in a series. It is aimed at mature readers and was penned by author W. P. Parker. It follows the adventures of John Korbin, a survivor who has lost all he holds dear and who comes to be the owner of a mysterious ship built from alien technology. Now with a crew keen to survive in a post-war galaxy, Korbin must undertake a dangerous rescue mission and a desperate fight against an old and familiar enemy. With a new homeworld to defend, Korbin and his crew will leave nothing on the table.

The Tesseract Code is a science fiction novel that is packed with action and compelling characters. Parker is a master at building suspense and mystery, and I found myself on the edge of my seat, waiting to discover John’s and his homeworld’s fate. John himself is a fully fleshed-out character who you find yourself rooting for and feeling sympathy with, immediately making the story accessible to everyone. The Tesseract Code is a work of speculative fiction which, though wild and out of this world on paper, could not be more grounded in reality in practice. Author W. P. Parker has delivered a thoroughly enjoyable and exciting novel that you will find hard to put down. Overall, I would not hesitate to recommend this novel to those who enjoy science fiction novels, and those who are looking for novels driven by a cast of strong characters.

The Tesseract Codex: Mission One is a futuristic sci-fi novel written by William Parker. Still grieving over the deaths of his wife and daughter, Captain John Korbin finds a new purpose in life when he inexplicably gets his hands on an ultra-modern alien spaceship named the Tesseract. Upon finding traces of an advanced AI life form, John makes attempts to resuscitate it and eventually succeeds in doing so. Mariah, a Techno who is materialized by the atomic force fields, promptly asserts dominance over the ship and feels highly suspicious of John's motives. But as the days go by, the two become close and start having a romantic relationship. On their way to the planet Panara-5, John and the crew actually discover that the war was not really over and that the opposition forces were still out there to be dealt with.

The Tesseract Codex: Mission One is a swift ride through the cosmos that lovers of sci-fi will readily appreciate. Author William Parker creates a highly imaginative and expansive universe filled with futuristic technology and wildly ferocious terrain. The characters serve their purpose in the story, but William Parker's primary objective seems to be to create a vivid and detailed setting that fills you with a sense of awe and wonder. John and Mariah's relationship is explored the most, and it serves as a backbone to the story. I enjoyed the banter between John and Kip and appreciated the meta-commentary in their discussions. I would recommend The Tesseract Codex: Mission One to readers who enjoy movies such as Star Wars or Star Trek.

The Tesseract Codex: Mission One is the first book in The Tesseract Codex series by William Parker. John Korbin lost everything to the war, and now he was ready for a change. Alone in the world after losing his wife, daughter, and whole family, John wanted to get a scout-class ship and ended up getting the Tesseract. Unlike anything John had ever encountered before, the ship featured alien technology, but he was ready to embrace it. He wasn’t ready for a ship like this, but it proved to be a godsend for his new mission. John and his crew had to rescue young Emma from kidnappers, and the Tesseract would be the critical element in their rescue mission. But something unexpected happened, and John and his team of misfits had to do whatever it took to protect Emma and get her back home safely. Could they do it?

I adored this fantastic story by William Parker. John was a jaded and rough around the edges character who liked things a certain way. If he didn’t get what he wanted, he would get cranky, and no one wanted that. The concept behind the Tesseract, the technology, and the mystery around Mariah were all made an intricate part of the story. I enjoyed the dry sense of humor John had and how entertaining each scene was. There was never a dull moment in The Tesseract Codex, and John’s development was a massive part of that. He was intelligent, poised, and ready to take charge. He was a human character, someone who had emotions and handled pain in the most natural way. The pace was perfect, the narrative flowed smoothly, and the overall story was very entertaining. I cannot wait for the next part of the series.