Shiloh and Dande the Lion 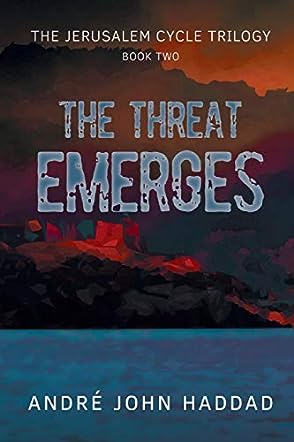 André John Haddad woke up one morning with the complete storyline of The Jerusalem Cycle Trilogy in his mind. When the idea had evolved into a partially completed manuscript, André interviewed a former ambassador to Israel, asking him if he thought he would see peace in the Middle East in his lifetime. The ambassador was surprised and terrified at his own response. Right then and there, André knew that he had a story worth telling.

André is an industrial psychologist who lives in Ste-Adèle, Québec with his wife, Louise, and is currently working on his follow-up series of Louise Destrey thrillers, including the soon-to-be-released The Thirst.

The Threat Emerges by André John Haddad is the second novel in the Jerusalem Cycle Trilogy. The work for Louise and Cardinal is not done. The fate of Jerusalem is hanging by a thread but no one believes them. While these two are trying their best to fight for this historic city, a threat is emerging with a serious plan that can damage not only Jerusalem but also the world. A soldier is trying to sell an experimental bomb stolen decades ago to the highest bidder. It is up to Louise and Cardinal to put their heads together to come up with a game plan and race against time to stop the bomb from getting into the wrong hands. Can they do it? Or will they fall short?

This fast-paced novel had me sitting on the edge of my seat and reading on and on. Full of suspense and plenty of action, the story takes the reader on a journey that you will not want to end. I was immensely grateful to the author for adding a map at the beginning of the novel, which made it easier for me to understand what was happening and where it was happening. The novel is divided into three parts and each has its own significance in terms of character and plot development. I enjoyed how each character had their own part to play and once they achieved their goal, they did not become stagnant but continued to evolve. Louise and Cardinal (I love his name) make a great team; they were persistent, they were determined and they were loyal to each other and the cause. I love it when a male/female duo is the center of a story but they are a team and the author nailed it!