The Throne of Frost 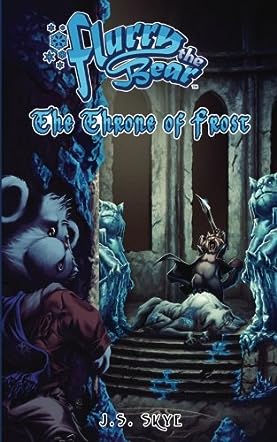 J.S. Skye grew up in the Midwestern region of the United States. At a very young age, it was apparent that he was very talented. Finding that he was gifted in music and art, he plunged himself into both. As time passed, he set aside music to focus even more of his attention on developing his skills as an illustrator.

All throughout his years in school, J.S. Skye spent every available moment creating and developing fictional worlds. Caring about realism, he developed multiple people groups, countries, worlds, and even languages. His fictional realms were created through both written and visual mediums.

After traveling to almost a dozen different countries and studying different cultures, J.S. Skye decided to implement his interests in ancient cultures, history, languages, mythology, and more into his writings. He decided it was best to pour his heart and passion into writing instead of having divided interests between both art and literature.

J.S. Skye has accumulated a fairly large collection of his various writings. These stories range from all types of different genres such as mystery, science fiction, fantasy, and even horror. Friends encouraged the aspiring writer to produce a novel and see how things progressed from there.

J.S. Skye's first novel, The Granted Wish, was met with cheerful affirmation. The positive feedback was overwhelming and unexpected. Fans of his Flurry the Bear novels grew and began to clamor for more. From this point forward, his first novel series came to be.

Book three in the Flurry the Bear series, The Throne of Frost by J.S. Skye is another spellbinding read in a series that should be gaining a lot of fans among readers of children's fantasy and sci-fi. The inhabitants of Mezarim are suffering from inclement weather, with temperatures dropping to freezing point. The worst could befall the citizens of Ursus. Flurry’s prospects of fun with friends are marred when his sister and another bear cub go missing. Alongside Noah and a wolf called Vallidore, Flurry sets out for answers, but he isn’t prepared for what awaits him and his friends. He will be heading straight to Jack Frost’s lair and will have to face a powerful polar army. Jack Frost is a tyrant who is more than ready for Flurry. Does Flurry stand a chance this time?

I couldn’t help thinking of a children’s movie while reading this captivating story in the series. Flurry is a character that is well-imagined and accomplished to perfection, a daring bear cub that will attract both young and older readers. J.S. Skye has the rare gift of bringing readers into the world of bear cubs and making them feel a strange familiarity with the cubs, as though they were walking among friends. The author’s crafting of setting is impeccable and readers will enjoy vivid images like the blizzard and the white snow, without forgetting the treacherous landscapes. The Throne of Frost is well-plotted and intelligently paced, the kind of story that grabs the reader from the start and forces them to leave aside every other task until they turn the last page. But when you are done, you’ll be hungry for the next book in the series.

The Throne of Frost: Flurry the Bear, Book 3 is an adventure fantasy novel for children and preteens written by J.S. Skye. Flurry was nervous as he, Fall and Caboose were returning home after their visit to the Land of the Sourpie. While they were all thrilled to be going home again, he knew he had behaved poorly and expected that his parents would be angry with him. They were indeed, but they were even more thrilled to have him and his sister safely back in Ursus. Christopher Kringle decided to throw a dinner banquet to welcome and thank the warriors of Tikalico who had escorted the three back to Ursus, and everyone was invited. All of them, however, couldn’t help but notice that the air had grown noticeably colder and even bears who were used to the North Pole couldn’t help but shiver and wonder what was going on. Christopher knew. The cold presaged the return of Jack Frost.

J.S. Skye’s adventure fantasy novel for children and preteens, The Throne of Frost: Flurry the Bear, Book 3, chronicles the continuing adventures of Flurry, Fall and the other characters readers have gotten to know and love from the preceding two books in the series. Skye introduces a new character, Drizzle, who is not so popular with his peers. He’s dyslexic, has limited social skills and likes mathematics and science. Flurry has no use for him, but Fall sees more in Drizzle than anyone else can. Skye’s plot shows Flurry learning to appreciate Drizzle in a whole new way as the mercurial Teddy continues to come of age. This imaginative and creative epic fantasy just keeps on getting better. Do start with the first book in the series and work your way through to this one. This series is too good to miss a single book. The Throne of Frost: Flurry the Bear, Book 3 is most highly recommended.

The Throne of Frost by J.S. Skye is the story of Flurry and his friends and family facing a long-time enemy of Christopher Kringle. In the beginning, Flurry’s cousin, Drizzle, comes over to visit the Kringles. Flurry, his family, and friends are already there. Unfortunately, Flurry doesn’t think much of his cousin. He finds him weird and hard to deal with. Drizzle decides to prove to Flurry and the others that he can be a hero too. Drizzle sets off on his own adventure. Flurry’s sister, Fall, goes after him because she doesn’t think Flurry is being fair to him. When Christopher finds out they left, he gets worried because they are heading into the dangerous part of the North Pole and a severe storm is coming. Flurry and some new friends set out to find them, but end up setting free one of Christopher’s worst enemies and putting the entire North Pole in danger.

The Throne of Frost still has much of the charm and action of the first book. Plus, I get a sense that the author, J.S. Skye, is paying homage to such books as Lord of the Rings and The Lion, The Witch, and The Wardrobe. As the story plays out, Flurry and Drizzle have to overcome their issues and learn to work together. I like the addition of Drizzle, who seems to read as autistic to me. He provides a great challenge to Flurry’s typical hero character. The only issue I have with this book is I wish there were more female characters. There are plenty of male characters, but only a few females. This is a common issue with many stories. However, I did enjoy the story.

Just back from one adventure, Flurry the teddy bear quickly becomes involved in a new and even more dangerous mission to save Mezarim, the land of the North Pole. The Throne of Frost by J.S. Skye details the quest Flurry must undertake to save his sister and another teddy bear who is trying to prove he is just as worthy as anyone else. Drizzle, a smart but awkward bear, feels unloved and unappreciated, and Flurry doesn’t help with his teasing and bragging. Wanting to prove himself to be just as brave as Flurry, Drizzle leaves Christopher Kringle’s home to find the land of Ursus. Unfortunately, this coincides with changes in the climate that indicate an ancient enemy may be waking up – Jack Frost. Flurry and his friend, Noah, along with the Kringle’s pet wolf follow after Flurry’s sister, Fall, and Drizzle in hopes of getting to them before they find trouble. Unfortunately, timing is not with them and Jack Frost is wide awake and ready to destroy the northern kingdoms. Will the stuffed animals and the brave wolf be able to prevent tragedy, or is this job too much even for the very special Flurry?

The Throne of Frost: Flurry the Bear, Book 3 by J.S. Skye is a riveting, action-packed story that will thrill and enchant children of all ages. Flurry still has a lot to learn about sharing and being a friend, but his bravery and hidden magical abilities get him through the worst of situations. The characters are great and the author's ability to keep the story line going is amazing. This series should be a 'must have' for every child's library. There is plenty for children to pick up through the lessons Flurry encounters, and they can grow in maturity along with this adorable teddy bear hero. The Throne of Frost is another excellent book for any child’s reading list.

Once again, readers can join Flurry the Bear. In the third book about his adventures, The Throne of Frost by J.S. Skye, the white teddy bear once again gets himself and some others into serious trouble. Flurry's teasing and bullying drives Drizzle away. Drizzle wants to prove himself worthy of others' attention, but had no idea what he would get everyone into. Fall (Flurry's sister) follows Drizzle and soon (almost) everyone is on the search. When Flurry catches up with Drizzle and Fall, his attempt to free his sister not only frees her, but also an old enemy. This time, lives are at stake and Flurry needs all the support he can get. But he also needs to learn to be supportive himself.

The Throne of Frost by J.S. Skye is another step in Flurry's growth into a respectable teddy bear. He still has issues with his ego, and often does not say the right things. But he learns. You can see a clear development from book 1 of the series to book 3. The little guy still has a long way to go, I would say, but you can see that he's trying to head in the right direction. I would highly recommend you to read book 1 and 2 of the Flurry The Bear series first. You can understand book 3 without previous knowledge, but it's definitely more fun when you know the backstories of the different characters. I enjoyed reading the first three books of the series and would definitely recommend the whole series as a great gift for kids who love reading.