The Umbrella And The Wind 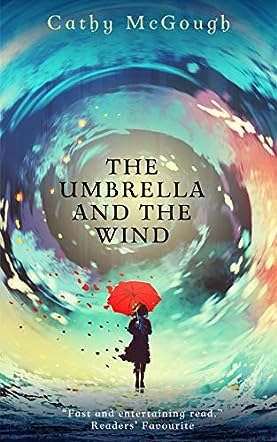 Cathy McGough is a multi-award winning, and best selling author who lives and writes in Ontario, Canada.

It’s a strong, windy day on Friday the 13th when Alice Mitchell - recently widowed and a retired high school teacher - braves the weather to get herself an Extra Strong Vanilla Latte at the nearest drive-through. On her way home, an umbrella cracks her windshield and unexpectedly knocks her out cold when she pulls over. Later that day, a strange, spinning green bottle led her to come to the aid of two people who became victims of the hazardous flying object. These strange incidents, however, seem trivial when she finds a large green object has crashed through the roof of her house into her living room a few days later.

Coffee, umbrella, a green bottle, and a green UFO. The Umbrella and the Wind by Cathy McGough has an imaginative but eccentric premise, as well as a fast-paced and chaotic plot. It’s funny and unpredictable. It has some sweet moments regarding Alice’s deceased husband. The best part for me is the satirical joke which gives me a bit of an insight on McGough’s view on politics. I had a momentary ‘duh’ moment when I wondered why a president was handing out his business card to people. The short chapters made the reading even swifter. The prose is clear and the narrative is straightforward. On the whole, The Umbrella and the Wind is a fast and entertaining read. Whether one likes it or not, it’s guaranteed to keep one’s brain neurons firing just to keep up and stay on this bizarre roller-coaster sci-fi ride.