The Vengeance of Snails 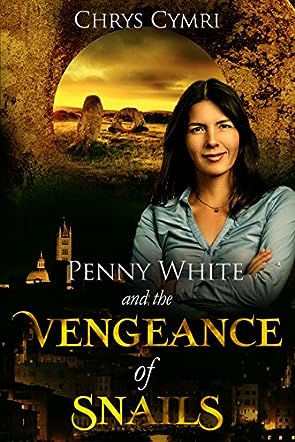 Penny White and the Vengeance of Snails by Chrys Cymri is the fourth book in the Penny White series. After being dismissed from a church in Lloegyr, Penny is ready to put her failure behind her and return to her church in England, but the Bishop encourages her to finish out her sabbatical and face the archdeacons that wanted her to leave. She's hesitant to return where she isn't wanted. Meanwhile, changes are on the way for Penny as her brother comes home from the hospital, Morey and Taryn are awaiting the hatching of their children, Clyde continues to get bigger, and Penny has started planning her wedding to Peter. But when an otherworldly vandalism hits too close to home, she knows there's more going on than meets the eye.

Changes play a big part in Penny's life with a lot of big things all happening at once. After facing mortality, her brother James is dealing with the consequences of stopping his heart during the gryphon hunt. James is often seen as Penny's slightly immature and partying younger brother, but he shows more of his layers as he bonds with someone that was injured. It's nice to see more of his compassion, dedication, and intelligence, having grown from his introduction in the first book. Chrys Cymri dives even further into the different cultures and viewpoints of Lloegyr, and how those can clash. How Penny views the world isn't how the unicorns or dragons do. Cymri is brilliant at showing the layers to every side of a situation, with the common element that nothing is as simple as good or bad. Even characters that do despicable things are complex and have humanity to them. This is seen in how everyone views snail sharks as vermin, dangerous, and soulless, but thanks to Clyde, Penny knows this isn't true.

Vengeance of Snails shows a whole other side to snail sharks, making it clear they're not as simple as the monsters that everyone thinks they are. They're as layered and emotional as every other character. Clyde shines brightly in every scene he's in as he continues to understand what he is. He experiences prejudices from both Lloegyr and England, for people only see a snail shark as evil, and refuse to see how sweet, caring, and loyal he is. Some new characters will melt your heart. In true Penny White fashion, Vengeance of Snails is charming and emotional, perfectly blending nerdy fun, religion, and different cultures.