The Language of Equals The Visitors Of Orange 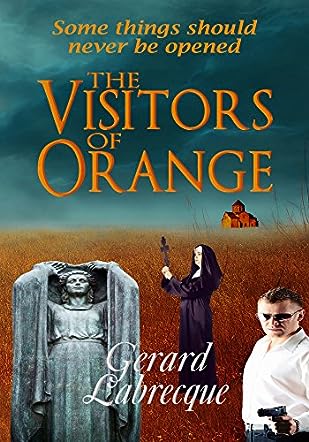 Gerry Labrecque was born in Northern RI to a family of 13. He has four children, and 6 grand children
His first book, The Wizard Lizard, was inspired by a bedtime story he told his youngest daughter when she was sick. This bedtime story, born out of love, inspired him to pursue his writing in a more serious fashion.

Gerry's second book, Random Glory (2011) is his first foray into the world of farce and fantasy, telling the tale of the Son of Frankenstein's Monster, and his journey to find love in a world where everyone wants to follow him with torches and pitchforks.

Lorelei and the King's Monster - The Wizard Lizard, Book II (2013) is a follow up on the adventures of Lawrence the Lizard. Lawrence continues to spread the magic of kindness throughout the kingdom.

The Crack of Dawn (2013) is a fast-paced, action/adventure thriller that follows Stanley Evans, a retired Navy Seal and veteran truck driver, as he leads the resistance against aliens, and tries to save the world.

The Adventure of the Wizard Pigs (2015) is the third installment in the Wizard Lizard series, following Lawrence as he lends his courage, wit, and kindness to his friend who is having a hard time making friends at school.

The Visitors Of Orange is a paranormal action novel written by Gerard Labrecque. Senior Airman Nathan Barrows had a crucial decision to make -- one that would define his life for years to come. He had seen and photographed an alien spacecraft while on a combat training flight. Contrary to his expectations, the military was not impressed by his discovery. They claimed that his camera yielded no evidence of an alien spacecraft landing, even if his polygraph showed that Nathan was telling the truth. Colonel Jenkins spelled out the choices that Nathan had; choices that had to be made right then and there. Ordinarily, he would be grounded and receive a dishonorable discharge to prevent him attempting to publicize his sighting. But there was another option; one that would involve him heading up a covert department, The Department of Extraterrestrial Investigation, which reviewed and conducted followups on any sightings that might occur. He would receive an honorable discharge, get to keep his pilot’s license and have a small plane at his disposal. Nathan really had no choice the way he saw things, and he agreed to be the new head of DETI. Twenty years later, he would have to wonder if he had made the right choice after all.

Gerard Labrecque’s paranormal action novel, The Visitors Of Orange, contains all the elements that are likely to make a conspiracy fan’s eyes light up. A quick glance at the cover shows a nun wielding a strangely shaped weapon called a mercifix, an exceedingly spooky stone statue and an armed agent wearing sunglasses, and the blurb hints at the “two types of darkness” that exist in that small historic town called Orange. Those clues about the nature of this book were more than enough to convince me that I had to read it, and I’m quite glad that I did. Agent Nathan Barrows is a grand main character with an intriguing past, and he’s the type of person you’d want on your side when facing unknown dangers. His impromptu and sudden affair with the much younger woman who was his therapist’s next appointment knocks him nicely off-kilter, setting him neatly in the trap of the mysteries that reside in Orange. Labrecque’s plot is engrossing and filled with twists and turns, and is ample fodder for even the most skeptical conspiracy fan. The Visitors of Orange is most highly recommended.

Compelling read hard to put down. Intriguing and fascinating topic. Great story telling by Gerard. Leaves you wanting more. What's next for Nathan?surprising and interesting well built tale of vampires aliens and small town folk that is innocently believable and well written. Suspenseful through the end. Teee
Terrific ending!