The Weird Adventures of Virgo Capella 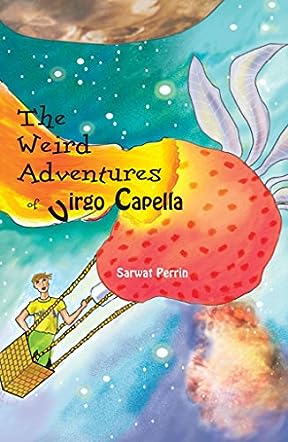 I was brought up in Iran, Pakistan, Switzerland, Spain and the U.S. The rich diversity of cultures, values and beliefs I was exposed to as a child influenced my thinking and shaped my global perspective.

Being exposed to different languages made me realize that words have emotive power. Words can make us laugh or cry. They can make us sing or crush us. As a result, I fell in love with reading books from an early age. This also sparked my love for writing.

I feel it is important to instill self-esteem, imagination and a sense of fun in children so that they can easily jump over the hurdles in life. It is this delight in reading and in being curious, in poking and sniffing, that I want to share with children.

I live in Toronto with my husband. He claims we are the world’s oldest children — I heartily agree.

What inspired me to write The Weird Adventures of Virgo Capella
I am fascinated by science. I want to turn on children’s minds to its wonders and ignite their curiosity to explore it further. When we look deeper and closer, we realize the world around us is full of mystery and it is science that can answer the burning questions.

The Weird Adventures of Virgo Capella is an adventure novel for children and preteens written by Sarwat Perrin. Virgo wasn’t too keen on his home life anymore. Somehow, instead of his dad, he had to endure Bob, an ex-military man who Virgo’s mother wanted him to think of as his dad. Bob wasn’t his dad, and Virgo’s mom was going out of her way to ensure that Virgo didn’t even get to talk to his real father anymore. Bob acted like a drill instructor rather than a father. When he and Virgo’s mom left that night for a photography job, he first made a point of lecturing Virgo on his studies, particularly his Science mark, which was, if Virgo was to be honest with himself, pretty bad. Bob also seemed to take a strange pleasure in calling Virgo “Warren”. He hated that name. Everyone called him Virgo; everyone but Bob that is. After Bob and his mom left, Virgo made a point of eating several dishes of ice cream, watched a strange video on YouTube and rescued his pet corn snake, Jellyroll, from his sister’s room. But later he discovered Jellyroll was missing and was nowhere in the house. Virgo remembered that Jellyroll liked a particular park and had been found there in the past, and, while it was far too late to be out, he knew he had to go and find his pet. What he did find, besides Jellyroll, were two very strange boys, who quickly became friends he cared about.

Sarwat Perrin’s adventure novel for children and preteens, The Weird Adventures of Virgo Capella, is a fun and fast-paced thriller of a story about a young boy who is suddenly swept up in a world of danger and intrigue. Virgo and his little sister, Lyra, are grand characters, and the plot of this story works wonderfully. I especially loved the astronomical thread that pervades this appealing story. Perrin also works in the stresses and emotional strains that affect children when their parents separate. Then there’s the magical moment when Virgo transforms himself from being a somewhat self-obsessed kid into a force for good against superior odds, and that’s a marvelous transformation indeed. The Weird Adventures of Virgo Capella is highly recommended.