The Wizard of Hawarden 2 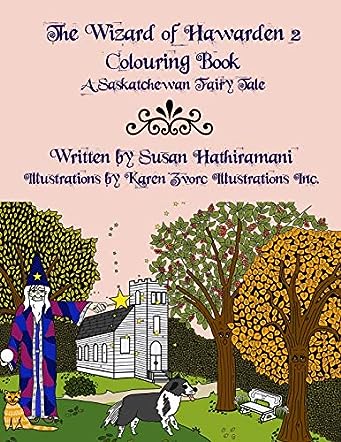 Susan grew up on a farm near the Boreal Forest in Saskatchewan. At an early age, she developed a love for drawing, gymnastics, horses, and being outdoors with nature. After graduating from Business College, she moved to the North West Territories and worked as Travel Agent at Northland Travel. After a year passed by, she missed her family and living on the prairies. Then she decided to move back to rural Saskatchewan in 1990.
At the age of twenty-six, she met her future husband, John Ewert, who was the owner of a kitchen manufacturing company in Alvena, Saskatchewan. After a few conversations, she discovered they had both worked as Visual Merchandisers for the Eaton’s Department store in the 1980s. Then after having a cup of coffee with John, she discovered they had both shared the same Supervisor, Al Dyck, even though they had both worked in different cities. She was delighted to find out he was the display person who had set up the ‘Once Upon a Christmas’ display at the Eaton’s store in Saskatoon. In addition, John worked on the display until it was dismantled, and moved to a museum in Saskatoon. You can see the display during the Christmas season at the “Western Development Museum" in Saskatoon.

Eaton's Department Store is buzzing with life. The wizard has cast his magic spell and all the toys there have come to life. The wizard finds out that Bradley the mouse and the rest of his family are eating all his marbled cheese so he and Gordo, his fairy godfather, turn a zucchini plant into an orange striped cat to chase the mice away. The wizard plants a magical bean in his garden and names the bean tree Guinevere. She falls in love with the wizard and destroys his home when he does not return the love. His fairy godfather comes to his rescue and finds him and his wife Susan a new home in Hawarden. The wizard realizes that Hawarden has become a ghost town. Will he be able to cast his magic spell and make changes in Hawarden?

The Wizard of Hawarden 2: Coloring Book: A Saskatchewan Fairy Tale by Susan Hathiramani is a whimsical story that will enchant and fascinate young readers as they visit parts of Saskatchewan. The concept of having illustrations that can be colored is fun and makes the book good to use during activity sessions in classrooms. It will also help children imagine the story better and get involved with it as they color. The idea of making a storybook into a coloring book is enchanting and this magical fairy tale will enthrall young readers, along with giving them the freedom to use their imaginations and creativity while they bring the characters and story to life with their colors.