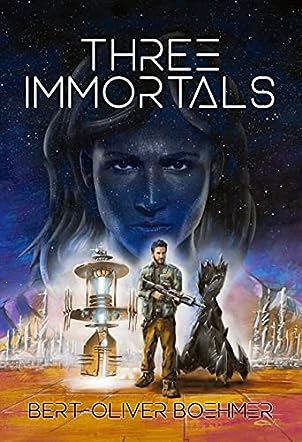 Bert-Oliver Boehmer is a science fiction writer and author of the new novel “Three Immortals”. After two decades of working with innovative software and bioinformatics companies, he turned his passion for futuristic technologies, exotic biology, and artificial intelligence into the foundation of a vast space opera universe.

Bert-Oliver holds a degree in computer science and has traveled this planet extensively. Since 2020, he focuses on telling stories about what we might find elsewhere and elsewhen.

He lives with his wife and daughters in Southern California, where his Jeep leaves tire tracks on many trails.

Three Immortals is a work of fiction in the science fiction and adventure subgenres and was penned by author Bert-Oliver Boehmer. Written for the general adult reading audience, this exciting space opera takes us into a far-flung future where humanity has had to pick itself up from the ashes of ruin in the Milky Way. As a fierce empress looms with an interstellar threat, war hero Kel Chaada tries to lead a modest nation but finds himself caught in the crossfire of a much bigger fight. When Kel flees to the farthest reaches of the universe to get out of human space, the wisdom he finds there may be just what is needed to uncover the secrets behind the immortals who have seized power.

Author Bert-Oliver Boehmer has crafted a truly thrilling science fiction work that is part space opera and part all-out interstellar war novel. The intricacies of galactic warfare make a really exciting backdrop against which the story takes place, with the ever-growing intensity of the conflict rising in the background. In this tense setting, we find amazing moments of fascination and innovation as Kel goes on a voyage of discovery for ancient wisdom, exciting new tech, and a poignant explanation of what has happened to humanity over the millennia. Overall, I would definitely recommend Three Immortals to fans of high-octane space drama that has all the refinements and poignancies of intelligent hard-core science fiction but also a ton of emotional realism in its characters and message. An unmissable adventure indeed.

Bert-Oliver Boehmer brings readers a powerful tale of betrayal and survival in Three Immortals. From the ashes of a Milky Way that is trying to resurrect from its ruins, three characters whose lives will intersect become the core of this space opera in a world full of alien civilizations, high-tech gadgetry, and ancient powers. Kel Chaada is a disgraced war hero who is betrayed by his best friend and is trying to lead a small nation of mining worlds. But he is about to get caught in the power play of a ruthless empress. Sya Omga regrets killing her father only once and wishes not to repeat the kind of history that her father has made. Vyoz Vyooma is a professional soldier who has seen strange worlds, but none has prepared him to see the strangest yet.

There is a strong sense of humanity in the characters of Three Immortals that magnifies in the melodramatic scenes Bert-Oliver Boehmer has placed strategically at certain moments. By virtue of their personal goals, the characters in this space opera set you on a high-octane adventure with fascinating twists and turns. Boehmer hits all the standard notes in this genre. With its switching POV, it allows you to get to know its characters—well enough that you will care about them and understand their desires. You come away feeling that you have become a part of their journey, that you have fought with them side by side, and have earned your own scars. Most of all, it forces you to think of the condemnation that we might subject ourselves to, and it might be too late for any one of us to realize it. Thee Immortals is a true sci-fi experience that will appeal to any space opera fan.

Three Immortals is an epic sci-fi space opera novel written by Bert-Oliver Boehmer. After an extra-galactic alien species destroyed the civilizations in the galaxy eons ago, humanity rose from the ashes of their ancestors to carve out a galactic government of multiple nations. However, the encroaching empire of Aloo Dash, led by the ruthless Ancestor Queen Sya Omga, is at war with the nation of EsChii over the contested planet of Prral. Using recently discovered ancient nanotech, Subsection Officer Kel Chaada delivers a hefty blow to the Ancestrates. But when he is betrayed by a close friend, the former disgraced hero and immortal finds himself trapped in the far fringes of the galaxy, captive to an alien species. Can he come back and stop Sya Omga from acquiring multi-reality awareness and galactic domination?

Fans of space opera sagas such as Star Trek or Dune will rejoice for Bert-Oliver Boehmer's action-packed sci-fi novel, Three Immortals, is set to scratch their epic stories set in space itch. Infused with gripping action, political intrigue, mystery, and fascinating conceptual scientific theories, the sprawling narrative traverses multiple worlds and alien civilizations that make for a fleshed-out universe in which you find yourself thoroughly immersed. The story is complex, intricate, and above all, mind-blowingly epic. Despite the large cast of characters and a plot filled to the brim with lore and a web of threads, Boehmer keeps the narrative well-paced and, in the end, satisfactorily ties up all the loose ends while leaving room for a potential sequel. I had an absolute blast with Three Immortals. Highly recommended to sci-fi lovers.

In Three Immortals by Bert-Oliver Boehmer, Kel Chaada is an accomplished man. He used to be a plasma shield engineer before he was conscripted into the military. Somehow, Kel had turned a poorly managed prisoner exchange mission into an offensive that helped his nation make planet Praal--the contested territory--theirs. Against the odds, he successfully walked the tightrope of politics and military bureaucracy in a move that saw him become the first councilor of the EsChii government. Yet Kel wasn’t done. In pursuit of a peace treaty with the enemy, the Ancestrate of Aloo Dashaad, he became the 317th member of the revered Assembly of Oorkuu. However, everything ended in disgrace, and his friend, Vyoz Vyooma, claiming to protect him, shipped him off to the enemy. Twenty years later, Kel is back with allies, and he’s determined to end the Ancestrate’s hegemony for good. But Vyoz is ambushing him again. Who will prevail this time?

Get in here, sci-fi lovers! Bert-Oliver Boehmer has prepared a feast titled Three Immortals for your hungry souls. Three Immortals is a mind-blowing science fiction novel that occupies your thoughts for prolonged periods after reading. I read a lot of sci-fi every year, and Three Immortals has to be among the best ten I’ve ever read. I kid you not! This book is prime bestseller material. From the names to institutions, technology, and world-building, it is clear that the author is a highly imaginative writer that knows his craft. This is classic sci-fi with all the strings attached. Three Immortals literally takes you out of this world through seamless depictions of intense galactic warfare and ingenious military maneuvers. Without exception, every element of this novel bears Mr. Boehmer’s mark of innovation—he even went as far as forming a language! I enjoyed every part of this intense read, and it comes highly recommended.