Tie the Dingo Down, Mate! 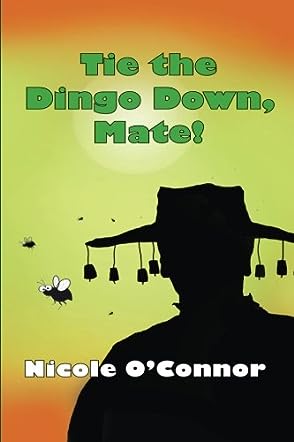 Nicole’s characters often face unusual challenges that could make you cringe or smile.

English and art are her passion. She attained several diplomas including Horsemastership, Enrolled Nurse, Editing and Proofreading, Writing for Children and Business Administration. Her writing draws from a wealth of life experiences gathered from meeting fascinating people.

She was born and raised in Zimbabwe (1965) to South African parents but left school at 15 due to political unrest. Her family moved to Lusikisiki near the Wild Coast of southern Africa.

These days she is happily married with two grown children and lives in New Zealand.

If you are looking for a light easy read with lots of smiles, then you won’t go far wrong if you pick up Tie the Dingo Down, Mate!, written and illustrated by Nicole O’Connor. It tells the story of an Australian vet who goes to what is now Mpumulanga in South Africa to work with a local vet there. No sooner has he arrived when he is asked to set up a new practice further north where he meets Gretchen, who offers to work for free as his receptionist, and later the young Miranda, who is more than a passing interest. Newly qualified, Gus thinks that becoming a vet is going to be an easy life, well rewarded financially, but he has a lot to learn. Almost as soon as he arrives in South Africa, he is taken on a hunting trip where one of his companions is almost killed while shooting a buffalo roaming with the local cattle. The animals he treats vary from the usual household pets – dogs, cats, and koi fish - to farm animals such as cows, sheep and horses to an ailing circus elephant. There are also encounters with snake bites, African horse flu, lightning strikes and animals suffering from eating poisonous indigenous vegetation. There are also the humans to deal with, from batty elderly ladies to aggressive farmers to the drunken son of a wife-beater, who is convinced Miranda is still in love with him.

The author of Tie the Dingo Down, Mate!, Nicole O’Connor, clearly writes a warning in the front of the book that if the reader was expecting James Herriot then they will be disappointed. I don’t agree. The stories are more varied, the animals more exotic and the background more exciting. I really enjoyed this book and, being familiar with the area, I snapped it up to review. An easy read, broken into bite-sized chunks with each chapter a story in itself. My only criticism is that I think Miranda is a little naïve for a young woman brought up in South Africa, who forgets to shake out her shoes, does not close the windows in the game resort, allowing the monkeys to climb in, and is nervous on occasions when she is confronted by snakes and other potentially lethal creatures. However, she is an endearing character and, I suspect, based on a real person, possibly the author herself? Recommended.

What a wonderfully entertaining read Nicole O’Connor gives us in Tie the Dingo Down, Mate! If you’ve already guessed from the title that this story has something to do with an Australian, you’d be right. But that Aussie wild dog known as the Dingo is not one of the many animals that give this unique story its flavour, or that will keep readers turning the pages as if this were a thriller… which, by the way, it isn’t. But that said, at times, the protagonist, a vet named Gus, finds himself in some pretty frightening situations when he opens a veterinary practice in South Africa. You see, in South Africa vets like Gus have to deal with kitties and/or puppies bitten by cobras, cows who nearly die from chewing on poisonous Oleander leaves, or umbrellas complete with their spokes, or beautiful horses whose ears are infested with maggots after tick bites. And how does even a strong man like Gus push a prolapsed uterus back inside a huge cow who keeps pushing it back out with every one of his shoves into her innards, while her newly born calf waits to be fed?

Nor is it only the animals that face danger behind every bush. Not long after arriving in South Africa, Gus suddenly realizes his raging appetite isn’t because the chocolate cake he’s enjoying is the best he’s ever tasted: he’s eating for two! And no, he's not pregnant. At another time, he manages to get his scalp nearly torn off by a vicious dog as he tries to put it down. And then there’s the crazy human animal, Peter Van der Skiet, who decides Gus has stolen his girlfriend and needs a good walloping. Gus’s experiences in South Africa are told with delightful humour by Nicole O’Connor. Readers will find themselves smiling chapter after chapter. Every little vignette is enlightening. Dialogue moves the stories along quickly and there’s just enough love, romance and bedroom antics to spice things up even more. I truly enjoyed Tie the Dingo Down, Mate! and recommend it when you really feel the need to read something unique. A very well deserved 5 stars!

Tie the Dingo Down, Mate! Veterinary Stories by Nicole O’Connor takes the reader into the world of junior veterinarian Gus, who after an acrimonious and sudden split with his fiancee finds himself reevaluating his life and career plans. Almost on a whim it seems, he journeys off to pastures new, swapping his comfortable life in Sydney for the unpredictable and somewhat dangerous wildness of South Africa. Soon the reader is transported to the world of deadly snakes, mosquitoes that carry all sorts of awful diseases, and farm animals that seem to have a varied array of mysterious conditions. Gus is soon joined by Miranda, and together they seek to explore and heal, and they come across not only animals but some very colourful characters.

Although billed as a series of short stories, which it is, the book also follows Gus on his adventures in the strange world that is South Africa. The author, Nicole O’Connor, clearly has an excellent and first-hand knowledge of the area and ailments that afflict the animals of this wild and dangerous country, and she has woven a credible and amusing yet at times informative story about a young vet and his assistant. Such was the credibility of the writing that at first this reader thought it was a biography, which must be a credit to the author for the authenticity of her writing. At times laugh out loud, at others toe-curling, the adventures of the somewhat green and naive young vet will appeal and remain in the memories of readers.