Get a Life! Delilah Blue To Unite a Realm 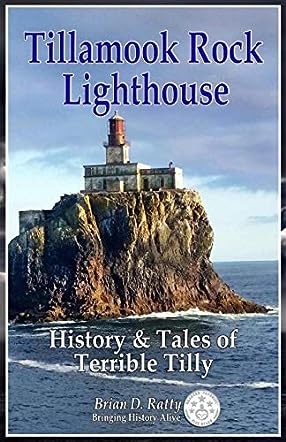 Brian D. Ratty is a retired media executive, publisher and graduate of Brooks Institute of Photography. He and his wife, Tess, live on the north Oregon Coast, where he writes and photographs that rugged and majestic region. Over the past thirty five years, he has traveled the vast wilderness of the Pacific Coast in search of images and stories that reflect the spirit and splendor of those spectacular lands. Brian is an award-winning historical fiction author of six novels and the owner of Sunset Lake Publishing.

Tillamook Rock Lighthouse: History & Tales of Terrible Tilly is a maritime history book written by Brian D. Ratty. The Tillamook Lighthouse was the last of three lighthouses that were set up to help mariners safely navigate the Columbia River Bar. This area, where the Columbia River meets the Pacific, is second only to the entrance to the Amazon River in danger to shipping. Rip tides, fog, massive waves and rocks have combined their forces to sink nearly 2000 ships since 1792, earning the area the title of the Graveyard of the Pacific. Cape Disappointment, on the northern shore of the Columbia River Bar, was the first lighthouse, built in 1865. Then, ten years later, a second lighthouse, Point Adams, was built on the southern shore. The two, while they framed the entrance of the river, were not sufficient to keep mariners from danger, and it was decided that a third would be necessary. Locating it was problematic as the original planned site, Tillamook Head, was nearly always enshrined in fog. The surveyors finally settled on a large rock one mile offshore. While the location did prove to be the best option, getting the lighthouse built and kept in good condition proved to be anything but. Terrible Tilly earned her name early on.

Brian D. Ratty’s maritime history book, Tillamook Rock Lighthouse: History & Tales of Terrible Tilly, will thrill anyone who’s interested in lighthouses or in the history of the Pacific Northwest. I’m interested in both, so this book was a natural for me. Ratty’s story is beautifully told, giving the reader an insider’s look at every aspect of the process of preparing the rock, getting the workers to and from it, despite the inclement weather and waves, and the difficulties encountered by those lighthouse keepers who kept the light going. One of my favorite places to visit in San Francisco is the Maritime National Historical Park's Visitor Center, where a First Order Fresnel Lighthouse Lens is on display, so reading about how this lens was installed and used in the Tillamook Rock Lighthouse was particularly of interest to me. Ratty includes a most impressive collection of photographs of Tillamook Rock Lighthouse under construction, shipwrecks, detailed pictures of the rock and its fissure and the lighthouse keepers who kept Tilly lit. Ratty’s own family history -- his grandfather nearly lost his life working on the lighthouse -- and his inclusion of letters and writings of the lighthouse keepers themselves, cap this absorbing and fascinating true-life story. I had a marvelous time reading this book! Tillamook Rock Lighthouse: History & Tales of Terrible Tilly is most highly recommended.

Tillamook Rock Lighthouse: History & Tales of Terrible Tilly by Brian D. Ratty is a historical account of one of the most isolated lighthouses in the world: The Tillamook Rock Lighthouse, also nicknamed “Terrible Tilly”. The book is mostly written in a narrative form by the author and includes a number of black and white illustrations. Other sections of the book include news reports, trivia about the lighthouse, and a first-hand account of a Coast Guard employee who was commissioned there for three months. Since I am from the Pacific Northwest and have spent some time on the Oregon Coast, this book caught my attention at once. And instead of being filled with boring drudgery, I found the book to be well written, detailed and exciting enough to keep me reading. Not all non-fiction books can do that.

The author breathes life into the story, as if the lighthouse was a person who heroically outlasted 70 plus years of storms and sea men. It brought a nice personal touch, from the courageous men who had to simply reach the dangerous island to get it measured (not an easy feat), to those who braved the fiercest storms that Mother Nature could create, and finally when the lighthouse was decommissioned and later sold. I found the information fascinating and the struggles that the men faced fairly unthinkable by today’s living standards. Tillamook Rock Lighthouse: History & Tales of Terrible Tilly by Brian D. Ratty took me back to a time when true grit, will and determination were the required tools of the day. Highly recommended.

Some called it ‘Tilly,’ others ‘TR,’ while still others preferred the name ‘hoodoo light.’ Regardless of whichever name was chosen, everyone agreed that the Tillamook Rock Lighthouse played a crucial role in negating the impending dangers posed by the disconcerting Columbia River. On 21st January 1881, the lighthouse cast its first beam. This would mark the start of seventy-seven years of its duty in guiding ships safely to shore. Tillamook Rock Lighthouse: History & Tales of Terrible Tilly by Brian D. Ratty follows the construction and function of the lighthouse as a beacon of safety after treacherous journeys at sea. Brian D. Ratty carefully examines its establishment while presenting the intricate plans that led to its construction and the many challenges that had to be overcome throughout the process. Set in the Columbia River Bar, Oregon, an area prone to storms, the lighthouse and its keepers experienced many horrific days, without any sign of civilization.

Tillamook Rock Lighthouse by Brian D. Ratty restores the glory of a fading jewel. After many years of preventing shipwrecks in the second most dangerous bar crossing in the world, the lighthouse stands today only as a former shadow of its past functionality. Still, Brian D. Ratty explains its current significance. He explores its symbolic importance as a representation of determination and defiance against destruction and death. Today, the lighthouse stands tall and everyone who sees it cannot help but wonder how many lives were saved through it. More inspiring are the lighthouse keepers who courageously endured many cold and fearful nights faced by death itself to faithfully perform their duty. Tillamook Rock Lighthouse by Brian D. Ratty will definitely serve an invaluable role in telling the story behind this sign of perpetual valor.