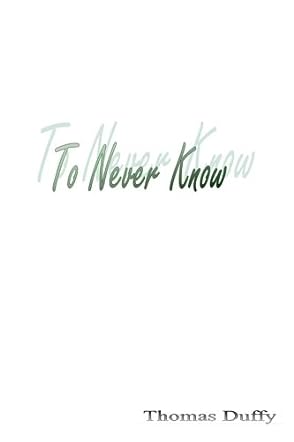 Thomas Duffy is a New York based writer who has authored several fiction novels, including 2014's One Love. He finds stories of day-to-day challenges fascinating and intriguing. Duffy has written about different topics such as working in retail, romance, and his previous book was a piece of existentialist fiction. To Never Know is his fifth novel. Duffy also has an interest in film criticism and has interviewed several celebrities from the silver screen, including Minnie Driver and Richard Dreyfuss.

To Never Know is a coming of age novel written by Thomas Duffy. Steven Lewis was adrift. A high school senior with little more than good grades to boast of, he had no prom prospects nor did he have a real grasp for what he would do in college. He did have dreams of going to NYU and getting into the Tisch School of the Arts for film, but he had no technical experience or the portfolio they would require. Then something strange and marvelous happened during his Humanities English class. He was reassigned the seat behind his normal place to accommodate a new classmate. Her name was Kelly Brennan, and while he had seen her in the halls at school, they had never spoken or shared a class before. For her part, Kelly was intrigued by the boy who was sitting behind her. He was cute in an intellectual way, and she began to wish he'd get to know her better, to ask her to the prom. Steven was immediately entranced by her. He didn't have gum that first day in class when she had turned around and asked him for some, but he made sure to have gum for her the next day.

The days went on, yet Steven never quite mustered up the courage to ask her to the prom. Neither of them ended up going. Graduation came and went, and Steven ended up settling for a college on Long Island, taking classes that didn't really excite him. Throughout his decidedly bland and uninspiring existence, he never stopped thinking about Kelly and wondering what she was doing and whether she ever thought about him. It would be a few years until he finally mustered the courage to write and send the letter he had always planned on writing. Sadly, by then, it was too late.

Thomas Duffy's coming of age novel, To Never Know, is a poignant and moving story set in New York around the time of the 911 bombing of the World Trade Center. Steven Lewis's life can’t really begin until he resolves his deep and continuing need to connect with Kelly Brennan. Duffy's hero seems to be sleepwalking through life until he resolves to break away from his parents' control and forced move to Florida, and he returns to New York. I cheered as he got on the northbound plane and smiled as he chose the pharmacy job that would keep him close to where Kelly grew up. To Never Know has a dreamy ambiance, echoing the rootless state of Steven's half-life as he works a job that fails to challenge him, and is befriended by Emily Brennan, Kelly's mother. Then something about the grieving mother calls out to him, and things are never quite the same -- which is in most respects a very good thing indeed. To Never Know is a well-written, lyrical and thought-provoking coming-of-age romance. It’s most highly recommended.

In 1994, Steven Lewis was a seventeen-year-old senior with a crush on a new girl in school named Kelly. Despite how he felt about her, she never knew how he felt. Though he was from New York, Steven had been living in Florida and had written a letter to Kelly to tell her how he feels about her just before the 9/11 terrorist attack was carried out. After borrowing money from a work colleague in Florida, Steven returns to New York. He has no idea that something terrible has happened to Kelly. He starts dating a girl named Nancy, but decides to end the relationship. Emily, Kelly's mother, is the reason why. Their romantic relationship is perhaps one that shouldn't be, but they both need each other more than they know.

To Never Know by Thomas Duffy is a realistic tale of a demotivated young man who finds love in the heart of an older woman. Before his relationship with Emily started, the author revealed how careless Steven was with spending his money. I enjoyed watching Steven grow into a more financially stable and happier person. On the other hand, seeing Emily start to cope better with Kelly's death because of having Steven in her life was also a good thing to see happening. Steven and Emily were great characters to follow and connect with; the ups and downs in their relationship were always realistic. This is a moving short read that is as much about finding love as it is about finding the strength to let go of the past.