To Swallow the Earth 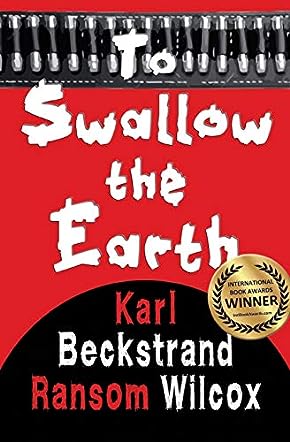 Ransom Wilcox was born in Taber, Alberta, Canada, in 1907. His family moved to Vina, north of Chico, California. They farmed, tended livestock, and did a lot of hunting and fishing in the Sierra Nevada Mountains. Once, to escape a charging boar, Wilcox stuck a pole he was carrying in the ground and climbed up!
One season the family lived in a tent while the men cut hay. Another year, Wilcox joined his father and brothers in Arizona, building a school on an American Indian reservation. Many elements of Wilcox’s stories come from his early experiences.
In 1943 he enlisted in the army. After the war, the Great Depression, and a divorce, Wilcox finished his schooling and opened a chiropractic practice off Union Square in San Francisco. Wilcox’s friends called him Ray (for R.A.) or Doc. Besides writing, Wilcox loved to walk in the great outdoors. Near the end of his life, he joked about leaving his body to science; “I’m sure they can use my brain. It’s in perfect condition—never been used.” His short stories and poems are published under the title, Horse & Dog Adventures in Early California.

Karl Beckstrand is the freckle-faced author of 14 books and more than 40 online titles. Raised in San Jose, CA, he received a B.A. in journalism from BYU and an M.A. in international relations from APU. A bilingual publisher with traditional and digital publishing experience, Beckstrand speaks about both kinds of publishing. He teaches media at a state college and has presented to Taiwan’s Global Leadership for Youth, city and state governments, library and humanities organizations, festivals and schools. He has lived abroad and enjoys volleyball and kayaking (usually not at the same time). Beckstrand's nationally-lauded activity books, Spanish & bilingual books (with pronunciation guide), ebook mysteries, and nonfiction stories feature characters of color and usually end with a twist. His work has appeared in: Barnes & Noble, Border’s Books, Deseret Book, Costco, Kindle/Nook/iBooks, Amazon, The Children’s Miracle Network, LDS Film Festival, U.S. Congressional Record, and Papercrafts Magazine. http://KarlBeckstrand.com

In To Swallow the Earth by Ransom Wilcox and Karl Beckstrand, Wade Forester has a big problem. His problem, it seems, is that everyone wants to shoot him. When he comes home after a long absence, he finds everything has changed. His father has disappeared and his sister won’t speak a word to anyone. And to make matters worse, someone else is living in his house, running his family ranch, and trying to kill him. Then Wade meets beautiful Patricia Laughlin who is searching for her family as well. Patricia is a strong woman and few people gain her trust or approval. There may be one, though, and Bridger Calhoun just might be the man to do it.

A clash between Wade and Bridger throws them on opposite sides. All three must make possibly life changing decisions. Wade must decide if risking his life to help Patricia is worth the trouble. Bridger decides he must win Patricia’s heart if his plans are to come together. Patricia must learn which of the two killers to trust with her life.

The challenge for a Western writer is how to tell the story in a manner that keeps the readers interested. In this case, how do they get to where they’re going? With this story, the authors did it very well. The characterization was good with the development of the relationship between the main characters. The action starts with the first page and doesn’t stop, keeping the reader's interest from start to finish. The dialogue was done well, with a little expected standard Western jargon thrown in. To Swallow the Earth is a good read for all Western fans.