Shadow of the Gypsy by Don Trowden and Valerie McKee 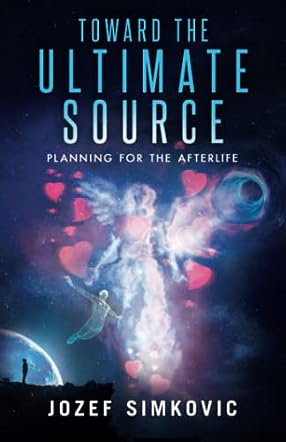 JOZEF SIMKOVIC came to the United States in 1987 as a refugee from Czechoslovakia which was still governed by the communist regime at that time. After settling in the United States with his family, he spent most of his time in the country working as a radio journalist for the Czechoslovak and then Slovak Service of The Voice of America. Later after the Slovak Service was closed, he continued work as a broadcasting engineer for VOA. In 2003, he was awarded the VOA Gold Medal for bringing the news to his native country of Slovakia in a meaningful way and entertaining fashion.

He considered his work for VOA to be his life mission, but later during his engineer years, he discovered his even more important destiny while taking part in numerous meditation programs at the famous Monroe Institute in Virginia. His extensive diary from these programs and other countless meditations became the foundation for his books.

Before coming to the United States, Jozef Simkovic completed the study of radio and TV broadcasting technology at the Slovak Technical University in Bratislava and a postgraduate study of computer programming at the Czech Technical University in Prague. He worked as the Deputy Chief in the Computer Center of the Slovak Broadcasting Technology and Operations Company. Jozef Simkovic was the middle weight karate champion of Czechoslovakia in 1976 and long time coach and teacher. He also plays competitive table tennis in the United States for many years.

It is extraordinary what a human being can discover if he believes he can. However, it is even better when this person decides to make his knowledge available to others. Toward the Ultimate Source: Planning for the Afterlife is a book by Jozef Simkovic wherein the author collects his metaphysical and spiritual journeys. He invites his readers to follow him around the universe and even into the human body as he shares personal experiences and conversations (one of them is with Jesus). Above all, he will show us our choices for the afterlife.

Toward the Ultimate Source is a book that I cannot compare to any other I have read previously. Jozef Simkovic recounts his experiences (meditations and dreams) that will probably be difficult for many of us to believe. People might read this book with skepticism, without recognizing the author's courage to express his point of view in such an honest way. This book is worth reading because Simkovic deals with many topics of great importance. For example, his views on contemporary divisions are very interesting, and I agree with them completely. The author invites us to reflect on things that we generally tend to overlook. How many of us have thought of the afterlife in a way comparable to his? I invite all readers who want to explore different viewpoints to open this book and get ready to discover what the author tells them. It will enrich them.

Toward the Ultimate Source takes readers through Jozef Simkovic's discoveries in his spiritual journeys to other universes and dimensions to help them on their own metaphysical and spiritual journeys. According to Jozef, the book includes what other writers and experts dare not reveal publicly to avoid negative criticism and ridicule. It goes beyond the boundaries set by people, groups, and organizations and reveals several mind-opening insights and possibilities. The book includes lessons and stories about different profound and engaging subjects, like an out-of-body experience, remote viewing, hybrid travel, the afterlife, Rama, reincarnation, and more. Jozef also has some interesting things to say about Covid-19, Christmas, AI, Jesus Christ, and human-made threats—like war, climate change, and the destruction of the earth.

Anyone who wishes to start a personal spiritual journey will find enough inspiring examples and stories in Toward the Ultimate Source. The book's liberating ideas challenge the reader's beliefs and preconceptions about life and encourage them to keep an open mind about exploring the universe and things that cannot be perceived through the senses. The author's tone is not forceful but persuasive, allowing the reader to arrive at their own belief. Personally, it was a therapeutic and relaxing experience as I had a most wonderful time imagining the travels, like the "calming ocean waves and the sounds of obviously happy birds and other animals." Jozef Simkovic describes his metaphysical travels and meditations with exceptionally detailed essays and accounts, which removed me completely from my physical world. If you wish to explore the unseen and discover what the spiritual world has to offer, you should read this book.

Toward the Ultimate Source: Planning for the Afterlife is an inspirational book by Jozef Simkovic. A former journalist and spiritual traveler, Jozef describes his metaphysical trips in an entertaining manner. He uses modern technology in meditation to transport him to distant worlds to help him understand human spirituality. The author narrates his experiences and those of other people who have been on the same journey. Jozef Simkovic explains spirituality from the metaphysical point of view, providing answers to some of the questions we have about things other than the physical world. The author also tells readers how he was able to help his loved ones spiritually and physically.

Jozef Simkovic dives into the topic of reincarnation and preparation for the afterlife. He uses his knowledge and experience to explain life beyond the physical. The stories, opinions, and examples are enlightening, especially to someone seeking more knowledge regarding spirituality. The author communicated his message effectively. The book challenged my existing beliefs and knowledge about life, although he does not make any attempt to force his beliefs on readers. I commend the author for making the book both entertaining and educational. I imagined myself being part of the journey and I followed the author's descriptions as if he was right with me. Toward the Ultimate Source is not a regular inspirational book. It is thought-provoking and I recommend it to anyone on a quest for knowledge as they will love it.

Those already on a spiritual path will understand that our earthly journey in the physical is temporary and simply a learning experience on the way to the afterlife and ultimately ascension. Everything in the Universe is made up of energy in motion, including thought. Raising our consciousness through thought to evolve involves increasing our personal vibrational level, which is the central theme of Toward the Ultimate Source: Planning for the Afterlife. Using advanced meditation and similar techniques, Jozef Simkovic has succeeded in visiting higher realms, which can only be done at soul level as our physical bodies could not survive the higher frequencies when they approach the Source (God to most people). Simkovic describes these out-of-body experiences in detail, from his preparation at The Monroe Institute to visiting Beings of Light such as the Elohim, although the techniques used are not described in any depth. There are fascinating insights into topics as diverse as the afterlife, remote viewing, the levels in the spiritual hierarchy, COVID-19, dreams, sex, avoiding chemical substances, the speed of light not being a barrier, and the End Times. The book emphasizes the power of thought and introduces many new concepts such as Related Organized Thought Energy (ROTE) and in that sense, it is revolutionary and challenges established beliefs.

Toward the Ultimate Source is the sequel to How to Kiss the Universe and Jozef Simkovic continues the theme of seeking higher learning through contact with the spirit realm. There are many personal anecdotes concerning his experiences. His journey reads like science fiction, is written in that style, and may be viewed as such by cynics. Those who are familiar with astral travel, psychic phenomena, and deep meditation will understand that the techniques described should not be attempted without proper training and supervision. There is a fine line between epiphany and delusion so extreme caution must be exercised. The author’s purpose in writing these books is to trigger a desire for spiritual evolution in mankind by illuminating the pathway to ascension for those who ultimately seek to become one with the Creator. There is a high cost, both in terms of personal commitment involving time and application, as well as the financial cost of attending workshops, lectures, and training with advanced teachers. Simkovic sets the bar at a high level and few may be tempted to emulate him as the task is daunting. The book may not meet with universal approval and is a difficult read for beginners due to the novel and complex concepts described. The book is rounded off with an excellent glossary. Whatever the case, it should be read with an open mind before a final judgment is reached. A fascinating book!

Toward the Ultimate Source: Planning for the Afterlife is a work of non-fiction by author Jozef Simkovicin the spiritual and philosophical subgenres. The work is best suited to the general adult reading audience owing to its complex themes and some use of explicit language in parts. In this work of spiritual revelations and metaphysical philosophy, we hear the true-life experiences of our author, a former journalist, and how his connection to angelic beings in the wider universe has helped him convey a message to all of humanity about what comes next. Taking modern life, politics, and religion into consideration, Simkovic presents ideas on how to live well here on Earth, with a view to taking those energies with you into the afterlife.

Having read another work by author Jozef Simkovic recently, I was impressed by how little repetition there is between his works, and I enjoyed the specific focus that this book has on living with happiness, kindness, and love as the key focus whilst we are here on Earth. Whether you believe in the possibility of leaving one’s physical form behind or not, it is absolutely fascinating to read about the author’s own experiences with traveling via his consciousness and the lessons this has taught him. I found the work inspiring as a powerful message of the impact of spirituality as opposed to religion. I’d certainly recommend Toward the Ultimate Source: Planning for the Afterlife to any reader with an interest in the astral plane, the mysteries of the universe, and the questions that science has yet to answer for us.