Infection In The Mind 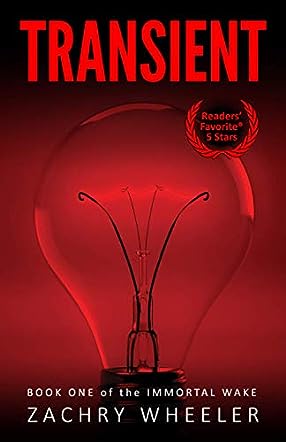 Zachry Wheeler is an award-winning science fiction novelist, screenwriter, and coffee slayer. He enjoys English football, stand-up comedy, and is known to lurk around museums and brewpubs. Learn more at ZachryWheeler.com and claim your FREE eBook!

Transient by Zachry Wheeler is set in a dark and distant future where death is obsolete. Jonas is a transient — a human spy living among immortals. His mission is simple: always learn, never get caught. In the year 2578, the planet is controlled by immortals and humanity struggles to survive in the mountains and forests, far away from the high-tech cities. Jonas has spent years in the lion’s den and he’s grown to admire the immortal civilization; he’s learned to love what he previously and blindly hated. A reckoning is coming. The fates of billions hang in the balance and when the ax falls, Jonas must choose between his species and the immortals he’s come to know as family.

I’m an absolute fan of authors, writing in any genre, who can create an entirely new environment and characterization from previously well-known characters—in this case, vampires who embody the noblest, equitable, and familial environment ever envisioned but never attained by humanity. Excerpts from historical articles and recon notes assimilated by Jonas over his years as a transient artfully fill in the blanks of his world and his purpose. Wheeler adeptly uses this plot tactic to add verisimilitude in building this strange new world without massive data dumps and simultaneously providing some breaks in the action. Transient is an exceptionally well-written, thought-provoking novel that ultimately carries a humanist message, contrasting feigned morality with perceived evil. The conclusion is, as usual in a series, a bit of a cliff-hangar. It’s not a steep cliff, just enough to leave the reader hungry for the next book, and an answer to the question, “did Jonas follow orders or not?” Fortunately for me, and I’m sure many readers to come, books two and three (Thursday Midnight and The Mortal Vestige) are readily available.

There is much to like, and much to admire, about Zachry Wheeler’s ingeniously unique and nimble interpretation of the rather widely exploited vampire genre in his instantly engaging novel, Transient. The plot is totally fresh and even somewhat involuted while remaining satisfyingly and comfortably familiar. Wheeler’s future world is assiduously developed and meticulously fleshed out, but with such brisk and confident assurance as to seem assumptively historical. Wheeler sacrifices no narrative velocity or fascination when explicating his topsy-turvy world, as he seamlessly enfolds such necessary information within a story guaranteed to grab and hold and reward the reader’s avid interest and attention. In other words, the writing quality proves fully equal to its profoundly original concept.

Any specific plot revelation of Zachry Wheeler’s brilliant new vampire treatment in Transient would spoil the reader’s experience. Don’t worry, the startling structural context presents itself right at the start, with full disclosure provided in subsequent recorded snippets meant to answer all questions as they arise. This literary device is exquisitely appropriate, adding to the thoroughly credible suspension of disbelief so readily surrendered by the reader. One believes in this new reality, and one identifies with the main character - Jonas Sevastyan Cahill - to the point of dreamlike personality transference. Meaning, when things go bad, one utterly feels the anxiety, apprehension, and isolated vulnerability of the embattled, embedded spy. Oh, did I not mention? This is not just a new take on the vampire tale. One might also say this is a vampiric take on the classic spy novel. And a love story. Whatever else one might call it, it is creative, imaginative, intricate, and brilliantly conceived.

Imagine a future where death is no more, getting old is a foreign concept, and life has a completely different meaning. Transient, written by Zachry Wheeler, is the first novel in the Immortal Wake series. The year is 2578, and the world is under strict control. Jonas, the main character in the novel, lives surrounded by the enemies of his kind, yet he starts to realize that not everything that he's been taught throughout his life is true. He created a life for himself to blend in with current society, and being more human than he thinks he is, he forms emotional connections with the very individuals who are deemed as the enemy by the society he grew up in. Admiring the immortal aspect of his surroundings, Jonas slowly learns how to love what he is taught to hate, thinking outside the box and crossing the boundaries of his mission, and finding out who he truly is as an individual.

In the world of eternals and transients, only the reckoning will make way for the new world order, and that time is getting closer. Zachry Wheeler paints a desolate world where the future is uncertain, and human values are practically non-existent. He writes about it in an intelligent way, describing characters and situations with passion and attention to detail. Transient: Book One of the Immortal Wake series is an exciting read from the beginning and encourages the reader to rethink everything in detail, suggesting that there is always another side to the story, usually left untold.

In Transient we meet Jonas, a human living among vampires (now given the sanitized label of eternals) in the far future. Jonas lives among the eternals as a spy, helping the few remaining humans to survive and hopefully find a way to defeat their mortal enemy. It's not easy for Jonas and the other transients as they must take drugs to hide their presence among the undead and must partake in all the rituals of eternal society - including drinking blood. But the eternals have made it easy, mass-producing the process of drinking blood for survival in private feeding rooms. In fact, the world of the eternals is pretty much a utopia where everybody works (less than 30 hours a week), gets universal health care (not that eternals are prone to disease or illness), gets lots of time off, has a great economy, and has ended wars, want, or need. There is no poverty, and everybody gets along. It's a perfect utopia, except that the remaining humans cling to the notion that the eternals are the spawn of the devil, an abomination unto God, and therefore must be destroyed. This leads to the major conflict for Jonas as he has started to disobey the rules laid down for transients - like don't fall in love. As Jonas struggles with his inner conflict, he is given a new assignment by his human handlers - a way that will kill off all of the eternals. Is Jonas up to committing mass genocide to save the human race?

The world-building that author Zachry Wheeler does in Transient is simply amazing. Set in a Seattle of the far future, with a race of people who cannot go out in daylight or they will die, he has created a fun and exciting world to explore with underground "skyscrapers" and a solar-powered economy (a bit ironic for vampires). I thoroughly enjoyed this book and highly recommend it to others. It provides a fun and unique twist on the vampire story with a compelling character in Jonas. My one quibble (and it's a minor one) is that Jonas' story is told in the first person, so the people around Jonas, from his eternal friends, to his human handlers and family, get only a cursory treatment. Maybe that's just the hazard of telling the story in the first person, but with such a wonderfully created world I wanted to know more about the people who live in it and having an eternal POV would have been nice. But don't let my quibble deter you from picking up this book; it is well worth the read and I look forward to seeing what else Zachry has in store in the Immortal Wake trilogy.

“At the turn of the 26th century, less than a thousand humans remained. They survived in secret under a veil of eradication. Their continued existence relied on the intelligence gathered by transients, or humans disguised as eternals. They hoped to uncover a weakness in the system, a lever to regain control. Transients followed two cardinal rules: always learn, never get caught.” Jonas is a transient, living in disguise as an eternal in Seattle. His years in the city make him fond of the peace and progress that the eternals have achieved and continued to maintain, making him question his commitment to his mission and to the human species. When the human elders come up with a deadly plan to eradicate their immortal enemies, Jonas must make a choice between peace or retribution. Transient is the first installment of the Immortal Wake series by Zachry Wheeler.

Zachry Wheeler puts a great spin on the classic vampire theme and develops it into a thought-provoking story premise and a well-paced plot. With its Kafkaesque rendering of humanity's backstory against the vampire-like eternals, the story has intrigue and drama focusing on a young spy's personal dilemma. The journal entries of the transients and excerpts of their handbook further deliver the sense of place that makes the 26th century a unique world. With immortality, natural death becomes avoidable where politics and religions are replaced by an efficient governing entity, Network of Exportation and Universal Services (NExUS). Overall, Transient may be a sci-fi fantasy but the inventive and profound quandary of the protagonist in choosing between two different lives raises questions about our reality and the idealistic world that is better for everyone. A great read.